Showing posts from 2011
Show all

Government of Sierra Leone Budget and Statement of Economic and Financial Policies For the Financial Year, 2012 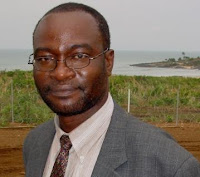 Theme: “Celebrating Five Years of Transformative Change” Delivered by Dr. Samura M. W. Kamara, Minister of Finance and Economic Development, in the Chamber of Parliament Tower Hill, Freetown on Friday, 25th November, 2011 Mr. SPEAKER, HONOURABLE MEMBERS I. INTRODUCTION Mr. Speaker, I rise to move that the Bill entitled, “An Act to provide for the services for Sierra Leone for the Financial Year (FY) 2012” be read for the first time. II. Delivering on Commitments 2. Mr. Speaker, at the onset of this Government in September 2007, Sierra Leone was relatively at the low end of several international country performance ratings, including in agricultural productivity, in road infrastructure coverage, in power generation and distribution, in telecommunication density, in access to finance, and basic social services - water and sanitation, health and education, in environmental management, as well as in economic and financial governance. 3. Mr. Speaker, Honourable Me
Post a Comment
Read more 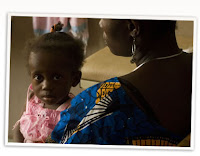 Still in Freetown and doing my stuff. As promised, I do have additional updates on what is happening in our nation's capital. Healthcare : The spate of deaths here in S/Leone is alarming to the outsider. We are losing more friends and relatives at a faster rate than we could make new ones. Yesterday, as I drove through Kissy Road between “Up-Gun turntable” and Savage Square, I noticed at least five funeral processions passed us on their way to the Kissy Road “berring gron”. Three of the corpses were evidently younger people who were probably no older than 30. People are getting so used to burying their dead that even the Okadas hardly pause for a second from their speeding, in respect of the dead. As I noticed several Columbia Davies vans ( they seem to have increased their fleet) transporting the hearse; the “business instinct” in me told me how profitable funeral parlors are increasingly becoming in this part of the world. Healthcare is no doubt the major contributor to u
Post a Comment
Read more 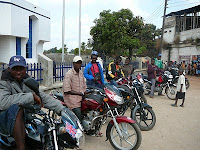 I have been in Freetown for two weeks working on my research project. For two weeks now folks and life has been very eventful. Here is a quick summary of my initial observation. Transportation : Movement from one place to the other by any means is extremely slow and difficult. For starters, there are no sidewalks. Therefore, vehicles, Okadas and pedestrians all share very narrow pot-holed roads and it is more dangerous to walk than ride a car or okada. Speaking of Okadas, the[y] are here to stay–annoying and marauding, they no doubt control this city. They are the preferred method of transportation for many Freetonians, and particularly popular among our young women running “quick missions”. Unfortunately, very little has been done by the central govt. to regulate and more importantly generate any serious tax revenue from this bustling revenue base. Communication : Perhaps if there is anything that needs serious government regulation and an overhaul – it is definitely this are
Post a Comment
Read more

August 04, 2011
Dark Clouds on the Horizon? Reflections on the SLPP Convention of 2011 By Yusuf Bangura The election of ex-junta leader Julius Maada Bio as flag bearer of the Sierra Leone People’s Party (SLPP) for the 2012 presidential elections has sent shock waves around the country and in the Diaspora. Although Bio was one of the front-runners among a motley crowd of 19 aspirants, people with less partisan attachments had hoped that the delegates would settle for a less controversial figure with no history of violence and elect an executive that is inclusive. Unfortunately, it seems that the party has decided to narrow its political appeal to its core support base, which is the South and East of the country, and adopt a candidate with a troubling background. Before addressing the political implications of this choice, it is worth noting that the SLPP has always distinguished itself from the ruling All People’s Congress (APC) on the basis of its aversion to violence, respect for the law and regional
Post a Comment
Read more
More posts