Showing posts from August, 2015
Show all

Two years ago, Sewa News interviewed Ibrahim Ahmad Kargbo. Our headline ran "Ibrahim Ahmad Kargbo begins Career as Public Policy Expert" Sadly, that promising start was over all too soon. A 30-something Sierra Leonean, Kargbo (center) who earned a public policy graduate degree at Murdoch University in Perth with an Australia Awards Scholarship, returned home to serve as regional manager of Sierra Leone's Anti-Corruption Commission in the northern city of Makeni. AusAID scholarships provide partner countries like Sierra Leone an opportunity to strengthen their human resource capacity through scholarships to individuals in key institutions, to undertake studies in areas relevant to the development needs of the country. Last week, Kargbo aka On Line Salone passed away after a brief illness, according to a chat message. The cause of death has not been announced. He was laid to rest today. Below are excerpts from tributes posted to the On Line Salone Facebook group
Post a Comment
Read more

The Body on Lumley Beach 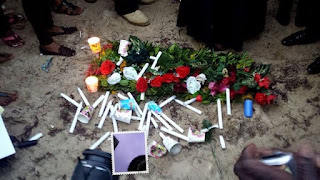 Flowers and candles at Lumley Beach where Hannah Bockari's body was found You’ve seen the horrific photos and the headlines and you’re shocked, saddened and angry. You should be. Sheriff Mahmud Ismail explains that until 2013, the dead woman on the beach we now know was 17-year-old Hannah Bockarie was living with her grandfather, retired sergeant major Joseph Foray Bockari, at the 7th Battalion Military Barracks, outside Freetown. When he was transferred to Pujehun, in Sierra Leone's Southern Province, the young girl moved to her aunts at Goderich, in the west of Freetown. Yesterday, Awareness Times published an interview with the mother of the rape and murder victim. Mariama Bockari spoke exclusively with the paper at her home in Eastern Freetown in the evening of August 18. (Mother of Rape & Murder Victim Breaks Silence, AT ) “I want to thank the government of His Excellency President Koroma, the Sierra Leone Police and the various pressure groups for the stro
Post a Comment
Read more

Former Sierra Leone People's Party chairman John Oponjo Benjamin escaped an armed attack on his home Saturday. According to reports, at least two people were injured at the opposition leader's home in the westend of Freetown. Archive photo of John Oponjo Benjamin  Benjamin told Awareness Times Publisher Sylvia Blyden how he was woken up in the early hours of Saturday morning by loud sounds. He looked out of the window to see about a dozen men armed with cutlasses, machetes, broken bottles with jagged edges, and knives. One of Benjamin's neighbors attempted to chase the men after they were repelled. He was stabbed in the stomach and on his head. Another resident got a stab wound on his forehead, Blyden said. Blyden also said the police have taken statements from Benjamin, his family members and neighbors and investigations continue. A suspect, who is linked to Benjamin's compound in Lumley, is being interrogated. Lumley is known for one of the busiest beaches on
Post a Comment
Read more

Richmond Garrick is an award-winning artist. He works in all mediums, but mostly in oils and ball point pen. His ballpoint pen produces portraits of iconic Americans inspired by his daughters’ elementary school project on Civil rights leaders. His paintings reflect issues dealing with human conditions and socio- political matters. They address the struggles and oppression of humanity, especially the dialogue on some of the paintings about the ten years of civil war in Sierra Leone. Richmond has exhibited his paintings and drawings at the Noyes Museum, Hunterdon Art Museum, African American Heritage Museum, and PPOW Gallery. He has won numerous awards for his art and for using his work to create awareness. They include the “Sierra Leone @50 Culture Award” during the celebration of the 50 years of independence of Sierra Leone, “14th Paul Aiken Encore Award” from South Jersey Cultural Alliance, “Culture Award” from United Artist of Sierra Leone in Britain, “SLAAM Award” from Sierra
Post a Comment
Read more
More posts