Showing posts from May, 2018
Show all

Freetown's Mayor given Key to City's Heart after the attack 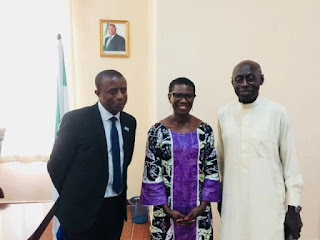 Freetown loves her mayor and there's no doubt she loves the hometown that has elected her to build a better city. On Friday evening, Mayor Yvonne Aki-Sawyerr announced on Facebook that she's "back on her feet," buoyed by the "support and good wishes from Freetonians, family, and friends." In the photo are Umaru Koroma, national secretary general of the Sierra Leone People's Party (SLPP) (left) and the newly-appointed Minister of Political and Public Affairs Foday Yumkella, brother of the 2018 National Grand Coalition presidential nominee, Kandeh Yumkella. Aki-Sawyerr, who was verbally and physically assaulted outside SLPP's headquarters this week, also said on her Facebook page that witnesses have identified the suspect and the information has been passed on to the police. Responding to the global outrage one day after the attack, the national secretariat of the SLPP issued a statement condemning the assault on the "Mayor of the City o
Post a Comment
Read more 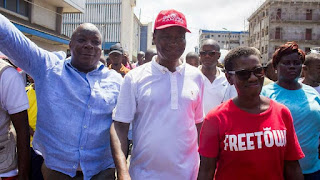 Freetown's new mayor, Yvonne Aki-Sawyerr, said in a statement posted on Facebook Thursday that she  was "verbally and physically assaulted yesterday by a few people who perhaps do not understand that I am the Mayor of all Freetonians and not some Freetonians." Aki-Sawyerr, seen in the above photo with Dr. Samura Kamara, the All People's Congress (APC) 2018 presidential nominee,  condemned all acts of violence. The mayor reportedly returned to work Thursday. Police have not released comments on the attack, but the mayor thanked the internal affairs ministry for their "support and interventions," adding she was "certain that necessary steps will be taken to ensure my personal safety and that of all Freetonians."  Read the full statement below: Dear Freetonians, I would like to once again thank God and thank you for giving me the opportunity to serve as the Mayor of Freetown. I am passionate about our city and committed to working with
Post a Comment
Read more 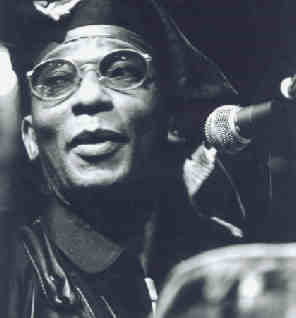 Black British drummer Mamadi Kamara has died, according to reports on social media from the city's Sierra Leonean community. The cause of death is unknown. Born in Sierra Leone, the artist was active through the 70's and 2000s, notable for his drumming and percussion days with Super Combo, one of the first local bands to gain international success. Residing in the United Kingdom since the 1970s, Mamadi has been in demand among musical groups of all styles because of his distinctive percussive voice, which ranges from high-energy rhythmic drama to free-flowing conceptual artistry. Constantly extending his horizons, he has emerged as one of the most influential percussionists on the British/African jazz scene, working with artists such as Louis Moholo and Lester Bowie, Mervyn Africa, Harry Beckett, Andy Hamilton, Cameroon Pierre, Courtney Pine and Andy Sheppard. He also played and recorded with African, reggae, soul and R&B bands.  Mr. Kamara was reportedly 70 years o
Post a Comment
Read more

M R . S PEAKER , H ONOURABLE V ICE -P RESIDENT , H ONOURABLE C HIEF J USTICE , M INISTERS OF G OVERNMENT H ONOURABLE M EMBERS OF P ARLIAMENT , E XCELLENCIES , M EMBERS OF THE D IPLOMATIC C ORPS D ISTINGUISHED L ADIES AND G ENTLEMEN : Let me start by thanking the people of this great country for giving me the opportunity to address this honourable House for the first time as President of the Republic of Sierra Leone. My victory is not only for myself or the Sierra Leone People's Party, but also for the people of this great nation. This historic victory demonstrates the advancement that the people of Sierra Leone has made in consolidating our nascent democracy. I am here this morning to translate my campaign promises as articulated in the New Direction People's Manifesto into policy actions. The  underlying principles of the New Direction are  Disciplined Leadership, Integrity, Efficiency, Professionalism, and Delivery .
Post a Comment
Read more
More posts