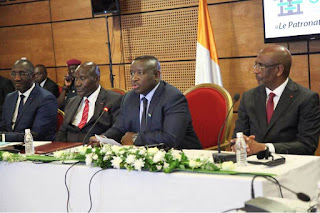 Speaking in French, the region's newest head of state told business leaders in Abidjan that the French-English divide can be an obstacle to trade during a meeting of the Business General Confederation of Cote d’Ivoire on Friday.

Although the region's 360 million people speak more than 500 native languages,  the most dominant are left over from the colonial era.

Of 17 countries in West Africa, five use English officially, and in education, including Sierra Leone and Nigeria.

President Bio told the French-speaking business community in Abidjan that his priority is to diversify the Sierra Leone economy through agronomics, fish farming, tourism and marine resources. He also praised the members of the Business General Confederation of Cote d’Ivoire for their performance, which has led to the growth of the Ivorian economy.

“I want to make this open invitation to all of you to come and invest in Sierra Leone to expand our private sector. There are great opportunities for us to strengthening economic cooperation,” President Bio said.


The trade surplus of the ECOWAS region, estimated at about $47.3 billion, is attributable to Nigeria ($58.4 billion) and Côte d’Ivoire ($3.4 billion), according to recent figures.

President Bio also expressed his admiration for the efforts of the Ivorian government to teach English in schools. He said that his government will intensify the use of French K-16 in Sierra Leonean schools.

President Bio said his engagement with the Ivorian government during Sierra Leone's peace process in 1996 encouraged him to learn French.

He stated that while he appreciated having a translator during the negotiations he made a promise to himself that he would learn French.

The two main signatories were President Ahmad Tejan Kabbah of Sierra Leone and Foday Sankoh, leader of the Revolutionary United Front (RUF) rebel group. However, Sankoh refused to honor the terms of the agreement, and Kabbah was forced into exile by a May 1997 military coup (though he regained power the following year), so the Accord failed to bring about peace.