Showing posts from July, 2021
Show all

Mabang may reopen soon as a two-lane bridge 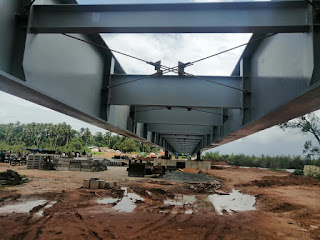 This weekend on Twitter, Ambrose James, director of Sierra Leone's National Authorising Office, tweeted  that the first phase of a 163-meter long steel beam was launched across the Mabang river for a new bridge. According to the tweet , 71% of the total 231meter bridge has been put in place. The new bridge is being funded by the government of Sierra Leone and the European Union (EU).  The National Authorising Office-Sierra Leone (NAO), is the principal management and executing agency of the EU-Government of Sierra Leone development cooperation. (See more on the NAO's Facebook page).  T he old Mabang bridge collapsed on February 22nd, 2013. Shortly after,  a group of concerned Sierra Leoneans in America hired civil and structural engineers to inspect the collapsed bridge. Based on the 2013 findings, the collapse of the Mabang Bridge was due to extensive scour on the piers of the bridge. "The foundation of the pillars was also destroyed by impact from eroded soil," the
Post a Comment
Read more
More posts