Showing posts from November, 2018
Show all

Stephen Douglas, a Canadian journalist, photographer, author, and media development specialist is leading an online campaign to find Massah Kaikai, who went missing sometime between August 4 and 8, 2018. According to Douglas's blog , one suspect, Ibrahim Mansaray, Massah’s driver, is currently in custody and has been questioned by the Inspector General of Police and the Head of CID. The suspect has provided very little information as to Massah’s disappearance but was in possession of Massah’s iPhone when he was arrested. Mansaray reportedly looted Massah’s apartment of furniture, clothing and kitchen items before returning the keys to the landlords. The apartment was paid for until the end of December 2018. After 45 days, the Cyber Crime Unit of CID finally retrieved scant information from Massah’s phone but it has not proved useful in tracking Massah’s movements or whereabouts. The legal team at Orange, the telecom provider, will not comment and have not been helpful in providi
Post a Comment
Read more 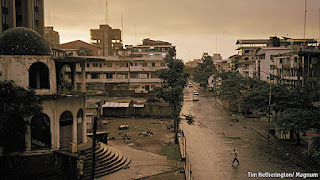