Showing posts from November, 2012
Show all

Ernest Bai Koroma, newly re-elected President of Sierra Leone  Every president who gets elected into office in a maximum two-term electoral system is concerned with two things. First, to get re-elected, and then his legacy. Koroma's first term government composition clearly reflected his re-election agenda. Majority of his cabinet and key government positions were filled from the party base (predominantly from the North). Then there was the People's Movement for Democratic Change (PMDC) factor. Under the circumstances of his first election, Koroma appointed some PMDC party members to a few government ministries either as ministers or deputy ministers as a payback for PMDC leader Charles Margai's endorsement, which ultimately handed him the presidency. And then, there was the strategic re-election move to penetrate into the south-east where his party had performed so badly in 2007. To infiltrate Kenema and some parts of the east, Koroma surprisingly made JB Dau
Post a Comment
Read more 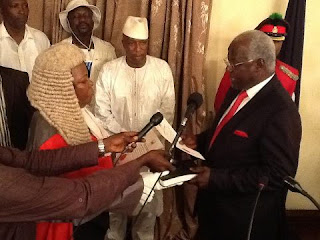 Sierra Leone's National Electoral Commission (NEC) announced Friday, November 23 results of the nation's Presidential Elections held last Saturday. According to the NEC, 1,314,881 votes were cast in favor of the candidate Ernest Bai Koroma and he received 58.7 percent of valid votes cast in the election. In the photo, Ernest Bai Koroma reads the oath of office as the President of the Republic of Sierra Leone as he is sworn in for a second term by Chief Justice Umu Hawa Tejan-Jalloh. Read the speech President Ernest Koroma gave after the swearing-in ceremony held today in the nation's capital, Freetown. Fellow Sierra Leoneans By the grace of God, I have once again been elected as your President. The people have spoken and their collective will has prevailed. I give praise and thanks to Almighty God for the great honour bestowed on me to lead this nation. This is a win for every Sierra Leonean; and I thank every Sierra Leonean for bringing about this victory for th
Post a Comment
Read more 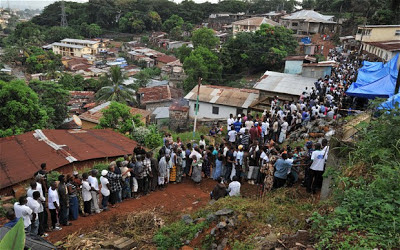 In less than three weeks, Sierra Leoneans will go the polls to elect a president, parliamentarians and local government officials. The contest that is most keenly watched and has raised the most heat is that of the presidency, which, because of its winner-takes-all character, will give the victor enormous powers to chart the country’s development path in the next five years. Each of the two main parties, the All People’s Congress (APC) and the Sierra Leone People’s Party (SLPP), is convinced that it has the numbers to clinch the top job, with APC partisans confident of victory on the first ballot. It is difficult to predict election outcomes in countries where there is no tradition of scientific polls that gauge voter preferences. Crowd turnout at rallies may provide insights, but can be misleading as Solomon Berewa (the SLPP’s previous flag bearer) found out in 2007. The situation is more complicated when the electorate is divided into two relatively equal ethno-regional bloc
Post a Comment
Read more
More posts