Showing posts from June, 2015
Show all

Nunu Ntshingila-Njeke, Head of Africa, Facebook Facebook’s newest business office will be headed by Nunu Ntshingila, the company’s new Head of Africa. Based in Melrose Arch, Johannesburg, Facebook’s first office in Africa has been set up to further the company’s commitment to help businesses connect with people and grow locally and regionally. According to the social network, Facebook’s active user population in Africa has grown 20 percent to 120 million in June 2015 from 100 million in September 2014. More than 80 percent of these people access Facebook from their mobile phones. “Mobile is not a trend; it’s the fastest development in communications we’ve ever seen. This couldn’t be more true in Africa – where so many people are mobile-only. This new office is a significant milestone for Facebook and our teams want to partner with businesses across the continent,” says Nicola Mendelsohn, vice-president of Facebook across Europe, Central and Eastern Europe, the Middle East, Afr
Post a Comment
Read more 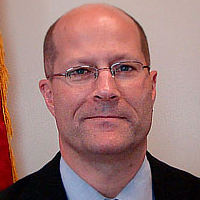 Ambassador John Hoover Chevron, the American energy corporation, has renewed interest in doing business in Sierra Leone, according to a State House Communication unit report. This week, John Hoover, the American envoy to Sierra Leone, met with Raymond Kargbo, the director general of Sierra Leone’s Petroleum Directorate, at Hill Station in Freetown, the capital city. The US ambassador recalled that Chevron pulled out because of low commercial viability. “We would work with you to avoid the situation that happened in Uganda as they were doing their petroleum exploration," Ambassador Hoover said. "Expectations ran far ahead of reality." Three years ago, Chevron Corp. announced that its subsidiary Chevron (SL) Ltd. had been awarded participation in two deep-water blocks located offshore Sierra Leone. Spanning over nearly 2,100 square miles, the blocks were located between 75 miles and 110 miles to the southwest of Freetown, the capital city. The two blocks - S
Post a Comment
Read more

Sierra Leone’s economic freedom score is 51.7, making its economy the 147th freest in the 2015 Economic Freedom Index — an annual guide published by The Wall Street Journal and The Heritage Foundation, an American conservative think tank based in Washington, D.C. Sierra Leone is ranked 36th out of 46 countries in West, Central, East and Southern Africa. The Index of Economic Freedom ranks the economic freedom of 186 countries around the world. According to this year's score, Sierra Leone has increased by 1.2 points since 2014, with improvements in labor freedom, freedom from corruption, and the control of government spending outweighing deteriorations in property rights and business freedom. The Wall Street Journal and the Heritage Foundation measure economic freedom based on 10  factors, grouped into four broad categories, or pillars, of economic freedom: Rule of Law (property rights, freedom from corruption); Limited Government (fiscal freedom, government spending);
Post a Comment
Read more

A shooting in the Krootown Road area of Freetown Sunday has left one man dead, according to reports posted in WhatsApp groups. "A man residing at Victoria Street has been shot. Eye witnesses allege that he was shot by a military personnel at 2am today. His body has been put on a mat and carried in town by a crowd consisting over two hundred angry youths. Colleague journalists please follow the story. --Williette James. The report below was posted by I.S. Koroma, secretary general of Sierra Leone's Bar Association Just from Victoria Street off Krootown Road where the alleged murder took place. The deceased Alimamy Kamara aged around 25 is said to be a man who is not mentally stable, but lived in a house [as] caretaker for relatives who live abroad. One military man nicknamed Marcos Valentino accompanied the OSD man [Kolo], who allegedly shot and killed Alimamy at around 02:00 this morning. This incident it was alleged, followed a series of threats and reckless beha
Post a Comment
Read more 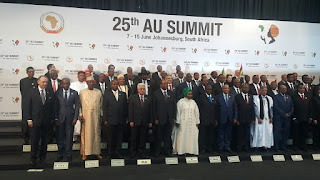 The African Union now consists of 54 members - every African nation with the exception of Morocco, which opted out because of the Western Sahara conflict. 25th AU Summit - 7-15 June 2015 Theme: "Year of Women Empowerment and Development towards Africa’s Agenda 2063"
Post a Comment
Read more
More posts