Showing posts from August, 2017
Show all

Coming a week after Freetown buried almost 500 people, the news that its city cemeteries have become playgrounds for criminals couldn't be worse. In October 2014, the first group of more than 10,000 dead Sierra Leoneans, who succumbed to Ebola-related symptoms, were buried in Pa Loko village, Waterloo. At the height of the Ebola outbreak, the 12-person burial teams managed by an Irish humanitarian organization buried up to 85 bodies per day. When the Ministry of Health and Sanitation ran out of burial plots (Sierra Leoneans frown on cremation) the Government of Sierra Leone purchased land about 20 miles east of downtown for an undisclosed sum. The Ebola cemetery at Waterloo is reportedly spread over ten thousand acres. Once the Irish charity left, The Western Area Rural District Council acquired management of one of the largest cemeteries in the country. In 2016, the Ebola cemetery authorities found that their funds could not meet the costs of long-term maintenance. So they
Post a Comment
Read more

Sierra Leone's State House has proclaimed a seven-day National Mourning period, as the nation begins to come to terms with devastating floods and mud slides that have left hundreds of people dead and entire communities buried under mud.  The week of mourning event has been organized around rescue and clean-up efforts, shored up by Army personnel activated by President Ernest Koroma in response to the humanitarian crisis. Red Cross officials estimate that 600 people are still missing after heavy rains and flash flooding led to landslides in the west African nation of Sierra Leone on Monday. More than 300 people are dead and local residents say they expect the death toll to continue to rise. According to weather.com meteorologists,  the area has seen nearly 20 inches more rain than average over the last 30 days.  UN in Sierra Leone‏ @UNSierraLeone  tweeted: Private sector and #UN working together to map disaster area and predict risk of new landslides.
Post a Comment
Read more

President Koroma: Tragedy challenges Sierra Leoneans to come together, help each other 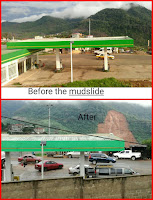 President Ernest Koroma addressed his crisis-stricken nation on Monday in a moving speech acknowledging the devastation but urging calm after a day of flooding and landslides in Sierra Leone's capital. Here's a transcript of what he said followed by a raw video after the jump.  Fellow Sierra Leoneans, our nation has once again been gripped by grief. Many of our compatriots have lost their lives, many more have been gravely injured and billions of Leones worth of property destroyed in the flooding and landslides that swept across some parts of our city. I am very disturbed by this national tragedy and with a heavy heart, let me extend profound condolences to the bereaved families. This is not a tragedy for you alone; it is a tragedy for every Sierra Leonean because the people who have perished in this disaster are our compatriots. Every single family, every single ethnic group, every single region is either directly or indirectly affected by this disaster. Fellow Sierra L
Post a Comment
Read more

The Auditor General of Sierra Leone released a list Monday naming government agencies and institutions that have failed to submit their financial statement for the purpose of auditing. The list includes the University of Sierra Leone, national stock exchange, and 10 bodies, including  the Small Arms Commission, which haven't submitted financial statements since their formation. "Having failed to submit their financial statements for auditing, these institutions should therefore collectively account for billions of Leones of public money they received as budgetary allocations/subventions," the press release said.  AUDIT SERVICE SIERRA LEONE            PUBLIC NOTICE FAILURE TO SUBMIT FINANCIAL STATEMENT TO THE AUDITOR GENERAL FOR AUDITING  Freetown, Sierra Leone- 7th August 2017- Section 119(2) of the 1991 Constitution mandates the Auditor General to audit the          Public Accounts of Sierra Leone and all public offices including the courts
Post a Comment
Read more
More posts