Coming a week after Freetown buried almost 500 people, the news that its city cemeteries have become playgrounds for criminals couldn't be worse.

In October 2014, the first group of more than 10,000 dead Sierra Leoneans, who succumbed to Ebola-related symptoms, were buried in Pa Loko village, Waterloo. At the height of the Ebola outbreak, the 12-person burial teams managed by an Irish humanitarian organization buried up to 85 bodies per day.

When the Ministry of Health and Sanitation ran out of burial plots (Sierra Leoneans frown on cremation) the Government of Sierra Leone purchased land about 20 miles east of downtown for an undisclosed sum. The Ebola cemetery at Waterloo is reportedly spread over ten thousand acres.

Once the Irish charity left, The Western Area Rural District Council acquired management of one of the largest cemeteries in the country.

In 2016, the Ebola cemetery authorities found that their funds could not meet the costs of long-term maintenance. So they wrote a letter to President Koroma, through the Ministry of Local Government and Rural Development, soliciting his help in raising six billion Leones for the construction of a perimeter fence around the cemetery at Waterloo.

Deputy Chief Administrator of Western Area Rural District Council, Peter Abdul Koroma told Concord Times that the council alone could not afford to fund the construction of a fence to protect it from intruders.

"It is a monumental cemetery that is very important to us as a country. Foreign researchers, as well as those in Sierra Leone, would be interested to know something about this cemetery. That is why it should be protected and preserved," he told the newspaper.

But for other cemeteries, like Kingtom in the west of Freetown, it is a different story. 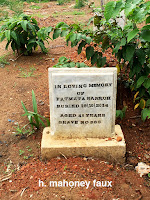 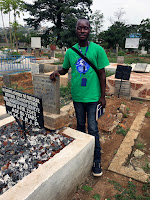 “Here are the pictures I took on June 21, 2016,” said Hannah Mahoney Faux, a US based retiree who takes photographs around the world for a hobby.

“The fellow in green is the supervisor who took me on a guided tour of the burial site. Turns out he even has the visitor log book in hand, in the image.


“The beautiful headstone marks the grave of the first Ebola victim buried in Kingtom. As you can see, the graves are simple but decent, and marked. I don't believe they were desecrated by robbers, nor were Ebola dead buried with expensive jewelry, fancy clothes, or in mahogany caskets, as stated in the newspaper article.”

Last year, Freetown City Council said hundreds of graves were targeted in nearly all of the capital city’s seven cemeteries. Between January and February 2016, around 250 graves in three cemeteries were plundered. One of them was the Kingtom cemetery where 60 percent of the over 6,000 graves are those of victims of Ebola. Robbers used pickaxes and sledgehammers to open concrete tombs, stealing jewelry and clothes from the dead.

But the macabre grave robbing does not end with clothes and baubles. In the middle of last year the FCC said that at least 700 graves were vandalized in Freetown and “body parts taken from corpses” between April through May 2016. FCC Environmental Officer Sulaiman Parker told national radio last year the authorities suspected the theft of body parts “is connected to fetish and ritual practices.” 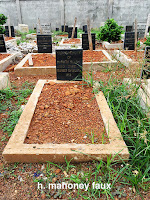