Showing posts from August, 2018
Show all

The Latest on Petrol Prices in Sierra Leone 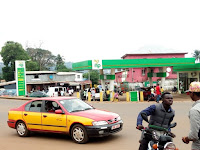 Kimberly Amadeo, president of World Money Watch, thinks oil price changes take six weeks to work their way through the distribution system. In Amadeo's "How Crude Oil Prices Affect Gas Prices" she talks about volatile oil and gas prices in the United States since the global financial crisis of 2007-2008. Five thousand miles away, a reporter looks at the "causes of price swings" in Freetown, the capital of Sierra Leone.  I n 2016, a fuel price increase saw the pump price for a gallon of gasoline and diesel shoot up from Le 3,750 to Le 6, 000 per liter (the equivalent of about 67 cents to $1.68), which caused the prices of all other goods and services in Sierra Leone to go up. Defending the increase in 2016, Abdulai Bayraytay, a former presidential spokesman, said removing the fuel subsidy was necessary to address the loss of revenue caused by the Ebola crisis and the fall in the price of iron ore, Sierra Leone's principal export. The Ernest Koroma gov
Post a Comment
Read more
More posts