Sadly, that promising start was over all too soon.

A 30-something Sierra Leonean, Kargbo (center) who earned a public policy graduate degree at Murdoch University in Perth with an Australia Awards Scholarship, returned home to serve as regional manager of Sierra Leone's Anti-Corruption Commission in the northern city of Makeni.

AusAID scholarships provide partner countries like Sierra Leone an opportunity to strengthen their human resource capacity through scholarships to individuals in key institutions, to undertake studies in areas relevant to the development needs of the country.

Last week, Kargbo aka On Line Salone passed away after a brief illness, according to a chat message. The cause of death has not been announced. He was laid to rest today.

Below are excerpts from tributes posted to the On Line Salone Facebook group that he helped found and on the walls of his numerous friends around the world.


He was youthful ...with an extremely promising future. He was a crusader when it came to fighting corruption. He believed in the true need for a corrupt free society.

He believed in friendship, was always ready to pass by through social media to check on me, and whenever am in town it was my duty to pass by in Makeni and have some fun, and discuss national issues inclusive of politics. We had a dream, that dream he could not live to see.

I met Ibrahim when we entered as preliminary year students at FBC [Fourah Bay College, University of Sierra Leone] some 15 years ago; he joined myself and the late Augustine Baker as our 'guerilla' [college slang for squatter students] and in no time was struck by his friendliness, humility and determination to make the most out of his life. 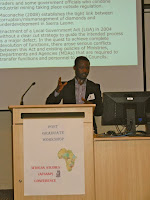 We offered the same courses up to Qualifying Year when we opted for different honors programs. We had a small group on campus we called D Clan and Baffoe came out as a hugely supportive and selfless brother...such was the greatness of his heart; and such was the intimacy and camaraderie of those years.

Bakayoko had a veritable passion for excellence; and always carried with him that deep awareness of his humble background and his difficult childhood which he attempted to chronicle in an autobiography he fondly titled THE AFRICAN LIVING. Sadly he never got to publish that book...what a loss!

We will miss you roomie! We have lost a friend and a patriotic Sierra Leonean! He had unwavering faith in the ideology of the APC [All Peoples Congress political party] and in the leadership of ACC [Anti-Corruption Commission] boss JFK [Joseph F. Kamara].

Late Bakayoko and I were colleagues who worked at CADO [Community Animation and Development Organization] in 2006-2007. He was a diligent person, hardworking and friendly.

I remember those memorable days when Bafo first introduced to us his book “AFRICAN LIVING. Sadly this late young man didn't publish the book he had so much passion for ... RIP Bakayoko. We will always remember you just as we do another CADO guru - late Augustine Baker.

I just can't stop thinking about you bro. The two years you spent with me on your return from Australia will never be forgotten. You're irreplaceable in your family but I'll be there when they need me. I may not be able to pay my last respect to you but I'm also happy that you wished me a safe trip when I saw you hours before your death.

[T]he many conversations I had with him since then about his campaigns in Sierra Leone. He was passionate about improving the quality of life for people whose poverty was in part a consequence of the theft of public money through corruption of public officials in Sierra Leone.

He had this RAV4 right hand jeep. There was this ban on right hand cars approaching and he was worried what to do. He was like “fellow, watin man for do? Enti u know we Na party man den o we for ready for let go." That was the man!

I had visited him at his ACC Office on Makeni. The visit was planned for less than an hour but it lasted longer. A friend Fouad Ayoub had sent him a gift through me from Conakry. When the parcel was opened, it was a shirt of green color. We laughed over it and made a promise of bringing Fouad "over." He could not live for us to accomplish that 'mission impossible’