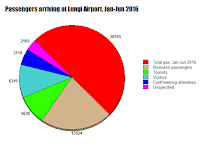 Of these, 13,524 were in the west African country on business, while 5,638 said they were on holidays  (tourists), with an additional 6,319 who said they were visiting friends and family.

More than 3,100 were there for conferences or meetings and a further 2,165 did not specify a reason.

The group of business executives is estimated to have spent at least $200 on food, transportation, and souvenirs, the paper said, conservatively estimating a cumulative spend of another $2.7million over the 6 month period.