The Ajisafe Problem and Religious Tolerance by Yusuf Bangura 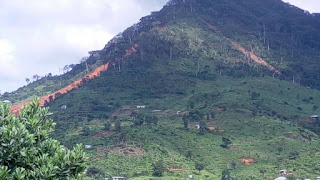 Yusuf Bangura is a Sierra Leonean-born United Nations economist who resides in Switzerland. Dr. Bangura is a Muslim. Here he comments on the sermon that recently sent ripples through the small West African nation which suffered almost a decade of war. Sierra Leone has long prided itself as a country that has maintained authentic religious harmony because of positive attitudes to faith among its citizenry.

Victor Ajisafe’s sermon of 25 September 2017 in which he denounced Islam as a religion of terror and denied Islam’s existence in Sierra Leone infuriated the nation, with many calling for a complete shutdown of his church, an apology, and his deportation. The government acted swiftly by arresting Ajisafe, temporarily suspended all activities in the six branches of his church (Christ Revival Evangelistic Ministries), and closed down his radio station.


As Andrew Keili observed in his usually razor-sharp reflections, Ponder My Thoughts, even though our politics is often highly divisive, Ajisafe’s despicable comments and gross ignorance about our history and society generated a level of unity (wan word, as Keili puts it) we have not seen in peacetime.
Unfortunately, this is the second time Ajisafe has offended the nation.

During the military’s usurpation of power in 1997 that aggravated Sierra Leone’s civil war, he is reported to have sided with the coup, defying resolutions of the international community, and proclaimed in his sermons that the elected leader, Ahmad Tejan Kabbah, would never return to power.
Ajisafe’s sermon was condemned by leaders and followers of all religious faiths--Muslim as well as Christian. Indeed, not a single video/audio clip or commentary in the vibrant social media came to his defence. Such unity is a demonstration of how deeply ingrained the notion of religious tolerance is in our society.
It is important to understand the basis of this tolerance and how to protect it from extremist preachers like Ajisafe and political agitators. Religious tolerance in Sierra Leone is fundamentally structural, which transcends the guarantees provided by the constitution and public policy. After all, national unity or non-discrimination along ethnic lines is also guaranteed in the constitution, but our practices, especially in the political domain, are disturbingly and brazenly ethnic. In other words, there must be something other than our constitution and public policies that has made us religiously tolerant.
The structural basis of our religious tolerance rests on three pillars.

The first is the presence of the two main religions in our ethnic groups.

Muslims may constitute about 70% of our population, but a sizeable Christian population can be found in most of the ethnic groups, especially the two numerically dominant ones, Mende and Themneh, and the Limba (all three groups constitute about 70% of the population), around which our divisive ethnic-regional politics is constructed. Even among the Krio, there are Muslim Krio (Frobay and Fulatong) and the majority Christian Krio. Perhaps, it is only the Fula and Madingo, the pioneers of Islam in pre-colonial Sierra Leone, that are highly mono-religious.
Second, there has been a high level of inter-marriage across ethnicity and religion.

Whereas inter-religious marriage is rare in many parts of the world, it is a very common practice in Sierra Leone. The wonderful point to note is that a spouse is not obliged to convert to the religion of the other spouse. It is, indeed, amazing to find in some families children practicing different religions. One of my brothers, who is a practicing Muslim, is married to a Christian; two of their children are Christian, and three are Muslim.
Third, most of Sierra Leone’s Christians have a Muslim heritage.

Indeed, many are recent converts from Islam. The rise of evangelical churches (Prosperity Churches) in urban areas--with their claims of performing miracles and solving personal problems, as well as their embrace of African ways of singing and dancing during prayers--has endeared many young Muslims to Christianity. Many of the pastors of these new churches were raised as Muslims.
Importantly, the new converts to Christianity do not denounce their Muslim heritage; instead, they embrace Christianity to experience another kind of spiritual fulfillment and advance material goals, while maintaining their bonds with Muslim members of their families. Keili is right that Ajisafe’s rants against Islam may be connected to his fear that Mufti Menk (the visiting Zimbabwean cleric whose address at the packed national stadium elicited Ajisafe’s rage) may pose a serious threat to his church in the marketplace of attracting, recruiting and retaining religious followers.
These three pillars of religious tolerance have provided a basis for Sierra Leoneans to respect the constitution’s provisions on religious accommodation, the emergence of moderate leaders in the various Christian and Muslim religious associations, and good working relations between Christian and Muslim leaders in the Inter-Religious Council of Sierra Leone.
Ajisafe is Yoruba by ethnic heritage. Islam and Christianity are fully embraced in equal measure by the Yoruba in Nigeria; indeed, there are more Muslims than Christians in Lagos. Religious tolerance is also present in Yorubaland, which makes it all the more troubling why Ajisafe decided to ignore his own heritage and stir up religious hatred in his adopted country.
A key lesson we should draw from this episode is that Ajisafe’s practices are an outlier in the dynamics of religious thought and practice in Sierra Leone. His divisive ideas do not resonate with Sierra Leoneans.
Calls for his deportation seem harsh, given his status as a naturalised Sierra Leonean. With the increased threat of terrorism, some Western governments (the UK, for instance, in 2014; and Germany more recently) have passed laws that make it possible to deport their citizens who have dual citizenship on grounds of public order.

Ajisafe’s utterances may fall under the category of a hate crime or one that is likely to disturb the public peace. However, given the structural basis of Sierra Leone’s religious tolerance, his utterances, though despicable, have so far not disturbed the public peace. He has issued an apology in writing and via audio.
Having said this, structures are not cast in stone; the three pillars of religious tolerance can change over the long run. This is where sound public policy can help to maintain the robustness of those pillars and keep religious identities open, accommodating and fluid. Utterances and practices of the types associated with Ajisafe may generate episodic disturbances even when the pillars of religious tolerance remain intact. I suggest four lines of action.
First, his radio station should not be reopened. Indeed, it was a grave mistake to grant licenses to religious bodies and political parties to run radio stations in a fragile post-war country like Sierra Leone. It is very easy to spread hate messages and stir up disturbances via radio, which a large number of Sierra Leoneans, often with imperfect information, listen to. It is shocking that Ajisafe’s sermon was even aired on his radio station. Radio licenses to religious bodies should be withdrawn as has happened in the case of political parties.
Second, there should be laws prohibiting extremist sermons—such as those that denounce other religions, extol violence, or support violent religious groups.
Third, even though the response of the public, including Christian bodies, is unanimous in condemning Ajisafe’s sermon, it is disturbing to learn that one of the mediating bodies, Body of Christ, which also denounced Ajisafe’s sermon and called for his apology, expressed solidarity with him when its leaders visited him in detention. What should have been a teaching moment for Ajisafe may instead have been an empowering moment for him. He and potential religious zealots may feel that they will have the backing of their religious colleagues whenever they offend the public. Organisations should learn to hold their members to account, by sanctioning them when they commit offences. The Body of Christ should make it clear to Ajisafe that he will carry his own cross if he wants to divide the country along religious lines.
Fourth, a small group of religious leaders, especially those in prosperity or evangelical churches, has grown stupendously rich on the pockets of poor Sierra Leoneans. These leaders have not given anything in return, in terms, for instance, of providing basic social services. It is such wealth that may have affected Ajisafe’s judgment in making his foolish sermon. Since many of the leaders of these churches are in the business of making money, the state should devise ways of subjecting their books to public scrutiny and taxing them.