"Give what you can and make a difference," their motto says. The hard-working, dedicated staff of the King George VI Memorial Home for the Aged give those eight watchwords meaning to the residents. But the home needs more support to keep doing the work they do so well.

In total, there are 22 paid and volunteer staff members at the King George VI Memorial Home, which is located in the east end of Freetown on the Grafton/New Regent Road. 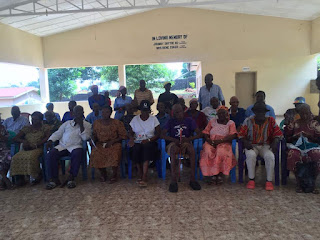 Mrs. Hannah I. Deen (sitting almost center in pink traditional print with the residents) is the treasurer of the not-for-profit organization.  She said the home is a charity and sponsored by annual donations from individuals, businesses, and organizations in the community.

Every year, the Rokel Commercial Bank gives the home Le10Million in cash and sometimes in-kind donations also worth about Le10 million.

Mrs. Deen made mention of other community organizations that make monetary donations to the home, but she said money often doesn't come in on time to cover salaries, which causes hardship for workers, who are already low paid. She added that if they could get regular financial support, they'll improve on the services they offer to the home's  residents.

Mrs. Love Laverse, one of the charity's directors, said with little support from the government there is a struggle for supplies, electricity, and potable water. Although the Water Company's Milli system provides water purification and water is brought in by trucks, they also have to rely on supplies from donors. When monthly donations are late, there's always a crisis.

A portable generator lights up the home at night.

The welfare organization was originally formed to house and care for soldiers wounded during World War II. The home opened on 12  May 1937, the same day that  Britain's George VI was crowned as king of the United Kingdom and the dominions of the British Commonwealth.

Fifty years later, a group of concerned Sierra Leonean citizens took over the organization and made it a home for the welfare of the aged. Ever since then, the King George VI Memorial Home has been working tremendously towards its goal: to help elderly Sierra Leoneans. 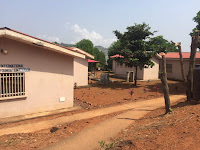 The compound on the Grafton/New Regent Road was opened on December 9, 2011, by President Ernest Koroma. It was built by Afrigas SL Limited for the government and people of Sierra Leone. Afrigas Ltd is the leader in the importation, storage, and distribution of cooking gas in Sierra Leone.


The compound is lovely, well kept,  and tidy. The home can hold fifty people, but this year, there are only thirty-four residents. It has four dormitories, two for the men and the other two for women.
Meals are served three times a day:  bread and tea for breakfast, rice and a local sauce for lunch,  and bread and tea for dinner. Occasionally they eat spaghetti, muffins, and more.

Able-bodied residents are taken out once in a while for recreational activities,  mostly to the beach or game centers and playing fields. When there are enough funds, they go out often, but mainly they do it once or twice a year. At home, they are entertained with storytelling, miming games,  concerts, and watching movies.

The King George VI Memorial Home ensures that the residents feel at home. Workers make sure of that. When residents fall ill, they are looked after by the home doctor and if any complication arises, the resident is taken to a hospital for treatment.

Few of the residents had a word with me and this what they said:

Mr. Momoh Brima has a physical disability, which limits his mobility. He is an old soldier and has been at the King George VI home for five years since the government sent him there. Mr. Brima has a son and two daughters who visit him. According to him, the home is his 'little paradise'. 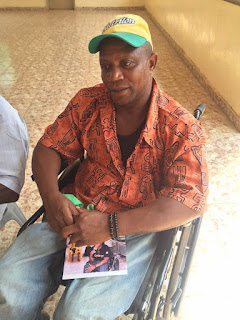 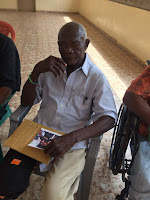 Mr. Daniel Wilmot Davies is over 70-years old. He lost his family during the war. He's been in the home for nine years and he said nothing could make him feel happier. 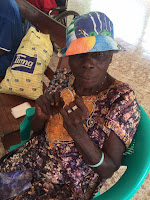 Mr.  Dillsworth has been in the home for over four years. He's there because he has glaucoma and is in search of care. He has two adult daughters who come to visit him once in a while. He said that he's happy to have found the home.

Mrs. Rosalyn Marlin is in her 80's. She came to the home to seek refuge because she had an accident, which left her with a broken right foot.  She has no family. She also said that she would have been dead if not for the home. She has been there for four years.

While I was there, female parishioners of the Holy Trinity Church in Freetown's east end brought in their annual donations The women gifted bags of rice, gallons of cooking oil and many other food items to the residents.

Please give what you can and make a difference to the King George VI Memorial Home.