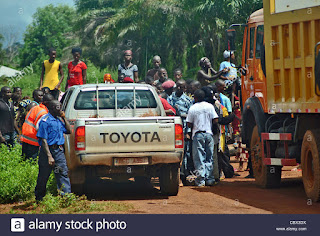 "African Minerals Ltd (AML), created the infrastructure to mine and transport iron ore in Sierra Leone, leading to significant local unrest," writes Stephanie Hawes in Lexology's "Mining company not liable for acts of police," published March 5. However, "the court held AML was not liable to the claimant local residents for the acts of brutality towards them by the Sierra Leone Police (SLP) who were attempting to restore law and order."

Hawes, a lawyer at Allen & Overy, says the Kadie K. vs. African Minerals Ltd & others case is "an interesting case for companies, in the extractive industry sector, concerned about their exposure to human-rights-related risk including in relation to the acts of security forces."  Read on.

This case deals with several key tortious principles relating to acts of third parties and will be of particular interest to companies in the extractive industries monitoring their exposure to human-rights-related risks. Here, an iron ore mining company, African Minerals Ltd (AML), created the infrastructure to mine and transport iron ore in Sierra Leone, leading to significant local unrest. The court held AML was not liable to the claimant local residents for the acts of brutality towards them by the Sierra Leone Police (SLP) who were attempting to restore law and order: Kadie Kalma v African Minerals Ltd & ors [2018] EWHC 3506.

AML’s project, to construct a mine and build a railway to transport the ore to the coast, had a major impact on the local community’s traditional ways of life. This factor, plus resentment over compensation payments by AML, led to serious conflict which came to a head when disputes between AML and the local community led to a reaction by the SLP, whose response degenerated into violent chaos (including rape, beatings, and shootings). The 142 claimants, who alleged they were among the victims of these abuses, claimed for compensation against AML. Although they recognised that the SLP had perpetrated the worst of these excesses, they alleged that AML was liable to compensate them by the application of seven alternative common-law grounds. Only vicarious liability, accessory liability and negligence liability are considered in this article.

The case had a number of unusual features, including the fact that the English court sat in Sierra Leone for part of the hearing. Although the acts alleged took place on Sierra Leonean soil, the English court agreed to hear the case because the actual iron ore producer (the third defendant, Tonkolili Iron Ore Limited) (Tonkolili) was previously a subsidiary of AML, which had its head office in London before going into administration in 2015. As a preliminary point, the relevant governing law of the dispute – both of liability and quantum – was the law of Sierra Leone. The parties agreed, however, that in respect of liability, the law of Sierra Leone could be treated for all practical purposes as being identical to that of England and Wales.

Since Tonkolili had inherited, over time, the rights and obligations of the first and second defendants, the judgment (and so this article) refers to the defendants generically as “the defendant”.

Defendant not vicariously liable – no relationship akin to employment

The claimants argued that the defendant was vicariously liable for the torts of the SLP (so-called “non-employee vicarious liability”) because the defendant had provided monetary support for specific SLP investigations, some financial backing to the SLP, and vehicles. While the SLP was not employed by the defendant, the courts noted that this is no longer a pre-requisite for vicarious liability; it is now well established that the relevant test is whether the “non-employment relationship” is “akin to that between employer and employee”.

No accessory liability – no common design

The claimants alleged, in the alternative, that the defendant was an accessory to the torts committed by the SLP as it had acted in furtherance of a common tortious design with the latter (accessory liability). For example, it was alleged that the SLP’s use of unlawful force on the protesters was part of a common plan between the defendant and the SLP, the execution of which rendered the defendant liable for the entirety of the harm caused.

Accessory liability requires proof that the defendant: (i) acted in a way which furthered the commission of the tort by the tortfeasor; and (ii) did so in pursuance of a common design to do or secure the doing of the acts which constituted the tort. The court considered that the defendant’s provision of vehicles and drivers to the SLP was sufficient to facilitate the tort of the SLP (thus, the first limb of accessory liability was met). It was not satisfied, however, that the defendant intended the SLP to act tortiously at any stage (and hence there was no finding of the second limb of common design). Indeed, “at all relevant times the solutions [the defendant] was striving to apply were directed at conciliation and not at the deployment of unlawful means”.

No duty of care in negligence for acts of third party

The claimants put forward three possible bases for the alleged duty of care owed by the defendant: (i) the defendant did not merely omit to prevent SLP from committing torts, but carried out certain positive acts which therefore took the case out of the scope of those authorities concerned with a mere failure to act in relation to the third party’s criminal act; (ii) in any event, the circumstances of the case fell within one of the established exceptions to the general rule that there is no duty of care for the acts of third parties; or (iii) this was a novel case which justified the imposition of a duty of care by the application of the principles identified in Caparo Industries plc v Dickman (Caparo).

The court acknowledged that circumstances may arise in which a defendant may be liable in negligence for the deliberate, and even criminal, acts of a third party in the absence of a common design or any element of incitement or encouragement. However, the defendant argued that it is only in particular and limited circumstances that a duty of care arises with respect to the deliberate acts of others and that none of those circumstances were present.

Acts and omissions necessary to find duty of care

The claimants argued that the fact the defendant called the SLP and provided it with material assistance in conducting its operations (even after it knew that the SLP had been using excessive force) meant that, when set against the background of the relationship between the defendant and the SLP, this was a case involving negligent acts by the defendant, rather than omissions. They sought to argue that this meant that the normal rule that a defendant is not liable for the acts of a third party did not apply. The court noted, however, that most of the claimants’ particulars in their pleadings were more in the nature of omissions rather than acts, and the general rule that there was no duty of care for the acts of third parties therefore still applied. Any acts relied upon (for example, the provision to the SLP of vehicles) could all be analysed by the application of the test as to whether they fell within the exception to that rule on the basis that they “created a source of danger” (see below).

The court considered the following exceptions to the general rule that there is no duty of care for acts of third parties:

–The defendant “creates the source of danger that would not otherwise have existed”. On the facts, while the defendant’s management was aware of the risk of violence, it did not create that risk. The provision of vehicles, food and financial support was not “a source of danger”.

In the alternative, the claimants argued that a duty of care should be established on the basis that the case was a novel one and the so-called Caparo duty of care test applied (namely: that the damage was foreseeable, there was a proximate relationship, and the imposition of the duty is fair, just and reasonable). While acknowledging that the facts of the case were “undoubtedly novel”, the scope of the legal duties arising were not and so the court considered that “no purpose would be served” by a detailed hypothetical consideration of what the application of that test would produce.

African Minerals is an interesting case for companies, particularly in the extractive industry sector, concerned about their exposure to human-rights-related risk including in relation to the acts of security forces. While, in this case, no vicarious liability or duty of care was established for the acts of third parties, the court’s approach was heavily fact-driven. It is not difficult to speculate about other instances where the facts might be sufficient to establish, say, supervision or control by the defendant company over the third party necessary to show a duty of care.

On the issue of whether parent companies may be liable for the acts of foreign subsidiaries, in January 2019 the Supreme Court heard the respondents’ appeal in Lungowe v Vedanta Resources plc. The Court of Appeal in that case had confirmed that a UK parent company’s duty of care may, in certain circumstances, extend to employees of a foreign subsidiary (see here).

According to Douglas's blog, one suspect, Ibrahim Mansaray, Massah’s driver, is currently in custody and has been questioned by the Inspector General of Police and the Head of CID.

The suspect has provided very little information as to Massah’s disappearance but was in possession of Massah’s iPhone when he was arrested.

Mansaray reportedly looted Massah’s apartment of furniture, clothing and kitchen items before returning the keys to the landlords. The apartment was paid for until the end of December 2018.

After 45 days, the Cyber Crime Unit of CID finally retrieved scant information from Massah’s phone but it has not proved useful in tracking Massah’s movements or whereabouts.

The legal team at Orange, the telecom provider, will not comment and have not been helpful in providing …
Read more