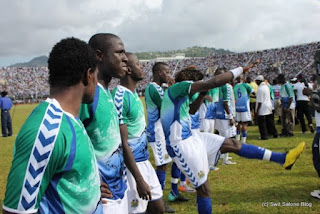 In addition, a male sports journalist Alimamy Kamara was assaulted by the same bodyguards, who have been named as Sweet and Kposowa.

According to the Sports Writers Association of Sierra Leone, "this is the first time in the history of football in Sierra Leone to see security guards behave in such a violent and rude manner," the statement said.

The close protection officers are accused of barging into the commentary booth at the football stadium during Sunday's match between the national teams of Sierra Leone and neighboring Liberia.


"The commentary booth is exclusively for the media and this act was done in full view of the international media as well," the statement explained. "One of the guards, by the name of Sweet even threatened to shoot and kill them with his pistol."


The association said the incident was "unfortunate" and called on Sierra Leone's president to fully investigate this incident and "bring to book all those responsible for this barbaric act," they added.


"We want to remind the President about his commitment to peace and security of his citizens as we strive to push the development of our country," the statement said.

Leone Stars reportedly won the game 1-0 against the Lone Stars of Liberia on Sunday, but without a decisive second goal failed in their bid to secure a place in the FIFA World Cup Qualifiers.