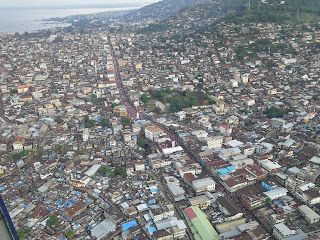 The International Monetary Fund's African Department has called Freetown's City Council (FCC) Property Tax Reform "good reform" in a statement released this weekend. According to Mayor Yvonne Aki-Sawyerr, the rate for 80% of residents in Freetown, #SierraLeone, is still less than 500,000 Leones ($52) per year. Or 42,000 Leones ($4.50) per month, so the FCC can deliver services they couldn’t deliver before.

The African Department at the International Monetary Fund (IMF) oversees the IMF’s operations and engagement with 45 countries across Africa, spanning the three main pillars of IMF work—policy advice, lending operations, and technical assistance. Their responsibilities also include building strategic partnerships and dialogue with senior policymakers and institutions across the region.

"We fully support the reform that appears to be in line with the best regional practice," they said of the Freetown City Council's Property Tax Reform. "While there is always room for improvement, we believe this reform could bring Freetown in line with other towns in the country and region in improving the property tax system."

"While these taxes represent almost half of the city's revenue (more than in other towns), a reform of the property taxation system is needed. We believe that successful implementation of this reform could allow for a doubling or even tripling of Freetown's own source revenue in a clear and transparent way. This increase in resources would reduce the FCC's reliance on at times unpredictable transfers from the central government and ensure sufficient and timely revenue for the provision of sanitation and hygiene service - critical during the pandemic and beyond."

"We welcome the FCC's actions to inform taxpayers on the introduction of the points-based property taxes, while recognizing it may not have reached all -mainly low-income-- property taxpayers. We would strongly support plans to continue this information campaign and suggest reinforcing it (including showing how this revenue can improve Freetown's public services.) This means ensuring improvements in public works are visible and linked to increased property revenue (e.g. signage that this school/hospital/street is maintained/cleaned using that money!)"


NO GROUNDS TO POSTPONE 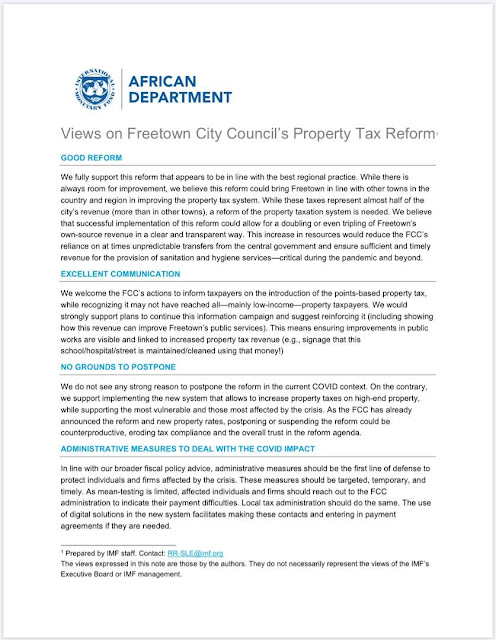 "We do not see any strong reason to postpone the reform in the current COVID context. On the contrary, we support implementing the new system that allows to increase property taxes on high-end property, while supporting the most vulnerable and those most affected by the crisis. As the FCC has already announced the reform and new property rates, postponing or suspending the reform could be counterproductive, eroding texa compliance and the overall trust in the reform agenda."