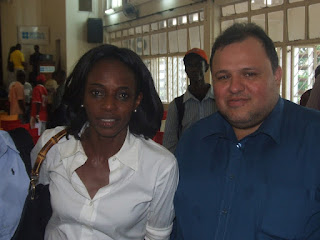 The letter signed by SLFA President, Isha Johansen (standing left in this archive photo), said that what was expected to be a 'healthy campaign atmosphere' quickly degenerated into an ugly, almost fatal scene.

Johansen apologized to Victor Lewis and wished the football veteran a speedy recovery. Lewis has served as chairman of the Sierra Leone Premier League Board.

Rodney Michael (photographed with Johansen in happier times) also posted a rebuttal to a listserv, known for its controversial online activity.

On the platform, Michael said Mohamed Kallon,  who is considered the most famous footballer from Sierra Leone in some quarters, was not his supporter as reported by Mohamed Kamara of Sierra Leone Football News.

"He  (Kallon) may be my friend and hero, but he is a Presidential candidate as well, so my rival," Michael wrote.

"I had finished my nomination at 3 pm and left for a business meeting and then went home," Michael continued in his statement Sunday. "The alleged stabber was an independent candidate for vice president. My aligned candidate is Margo Tarawally.

"What happened had to do with (a) supporter of Isha Johansen (and) an independent candidate, and the story (is) it was over late submission of nomination for Victor Navo, (an) Isha aligned VP 1 candidate. I was nowhere near the scene, not involved in any fracas, did not go near the hospital or police, and had nothing to do with the entire issue," Michael said, adding that he called Lewis to wish him well, and they spoke for about 10 minutes.

"I condemn all forms of violence irrespective of who, where, when, or how," Michael said.

In one article exploring the life of the Normalization Committee, set up by the football governing body, FIFA, in 2012, to administer the game in Sierra Leone, Sallieu Kamara wrote that FIFA, acting on the advice of the SLFA, appointed a five-member Normalization Committee with the mandate to "clean up the mess" that has bogged down the development of football in the country for a very long time.