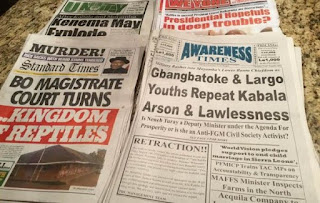 Reporters Without Borders (RSF) have unveiled their 2021 World Press Freedom Index.  This year's survey of 180 countries shows that journalists are finding it hard to investigate and report sensitive stories, especially in Asia, the Middle East, and Europe. (Newspapers of Sierra Leone photo courtesy of Calabash Newspaper)

On Twitter, RSF (@RSF_inter) tweeted that the leading takeaway from the 2021 RSF Index is that the main vaccine against disinformation is completely or partially blocked in 73% of the countries ranked by RSF.

How the Economic Community of West African States (ECOWAS) ranked

Sierra Leone moved up 10 spots from 85 in the 2020 World Press Freedom Index. The west African nation has been in the ranking since 2013.

Here's what the RSF said about Sierra Leone:

"Free not to make waves"

Sierra Leone’s media are pluralist and independent, and community radio stations, which reach a significant part of the population, broadcast without restriction. Julius Maada Bio, who has been president since April 2018, has kept his promises with regard to protecting journalists. The 1965 public order law criminalising defamation and press offences, under which journalists were often arrested arbitrarily, was repealed in August 2020, while the Independent Media Commission law was revised. During the 2014-2016 state of emergency resulting from the Ebola epidemic, the threat of defamation charges was widely used to gag the media, forcing journalists to censor themselves or in some cases even go into hiding. A journalist with the Freetown-based Times newspaper was detained on a libel charge for 24 hours in November 2019 in connection with a story that had not yet been published.