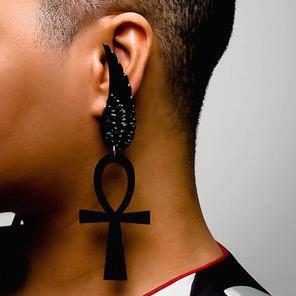 Baltimore, MD, 2/19/2013---Aisha Fofana Ibrahim has just completed another landmark study on Sierra Leone. "The Integration of the Gender Perspective in the Sierra Leone Police force" was launched yesterday at the Police Officers’ Mess at Kingtom, Freetown, according to an article by John Sorsor Samura.

The case study focuses on issues like institutional culture, training, policies, service delivery on gender-related crimes, access, community relations, accountability and oversight, Samura writes. Aisha Fofana Ibrahim said that in order to publish the report, the police conducted self-assessment to evaluate the implementation and effect of its gender-related policies in 2011.

The aim of integrating gender into the Sierra Leone Police is to look into gender issues in the force and to increase the number of female officers as a way of setting the stage for more inclusion of women into police management, Samura said.

I say it's great news from the "boys in blue" and I'm also pleased the point person is Aisha Fofana Ibrahim.  Here’s why.

Our paths first crossed two and half years ago when she was conducting research on women's political participation in Sierra Leone and the thirty percent gender quota. At the time, Dr. Ibrahim was the 2009-2010 Helleiner Visiting Research Fellow at the Ottawa-based North-South Institute. She was also the acting director/women and gender issues researcher and consultant at the Gender Research and Documentation Center, Fourah Bay College, University of Sierra Leone.

Fofana was in the Maryland/Washington D.C. area to get the diaspora perspective and I was one of the women she reached out to for an interview. See excerpts below:

Aisha Fofana Ibrahim: Are you in anyway actively involved politically or socially with the Sierra Leonean diaspora community? If so, in what capacity? If not, why?

Lango Deen: I'm a Sierra Leonean migrant who is connected by family ties, friendships, as well as community and alumni networks that Sierra Leoneans have brought with them.

AFI: Are you aware of the 30 percent gender quota campaign (for a constitutionally mandated quota system for women in parliament and all decision making positions)? If so, what do you think about this campaign?

LD: I was part of a small group of US-based women that started a Maryland chapter of the 50/50 Group sometime in the fall of 2002. We'd been energized by the publication of “The Sierra Leone Women's Manifesto/Declaration” and the words of people like Catherine Kamara, [then] president Tejan-Kabbah, and Professor Eldred D. Jones at the state launch of the 50/50 Group in parliament [in November 2001]. But I think almost a decade on a concession seems to have been made...Nonetheless, we're still hopeful that we'll see less girls drop out of school in Sierra Leone; so that as grown women, they suffer less disadvantage because of what Professor Eldred Jones called "less than proportionate access to education."

More educated Sierra Leonean women would mean not only more women pursuing careers in politics and government, but participation by a broader stratum of women in different aspects of local, regional and national government as well as politics.

AFI: Do you think that SL [Sierra Leonean] women in the diaspora are politically aware and engaged? How? Why or why not?

LD: Yes, I think they are very engaged. Women in the diaspora send billions of Leones in remittances. They pay school fees for children left behind with relatives; nieces and nephews. They provide college scholarships for their extended families. They also provide seed money for businesses and donate towards local, regional and national political campaigns. They're involved in providing safety nets or shoring up female relatives who lose out because of discriminatory land tenure laws and property rights in Sierra Leone.

Sierra Leonean women in the diaspora start up and lead diaspora-based partnerships and initiatives which provide community- and non-governmental solutions for maternal and child health, women's health, men's health, potable water, environmental protection etc. In essence, Sierra Leonean women in the diaspora share their expertise, time and resources because they care deeply about the old country and investing in the women and girls who make up more than half of Sierra Leone.

LD: I have no data, but based on anecdotal evidence I'd say, yes.  For example, NOSLINA's [National Organization of Sierra Leoneans in North America] dynamic executive director is a woman. I know there are other powerful female voices in Sierra Leonean immigrant associations across America. I know this is also true for the United Kingdom―at least when I lived there from 1985-1997. One example that comes to mind is the Sierra Leone War Trust, with leading Sierra Leonean women like Trudy Morgan, Yvonne Aki-Sawyer, and Marion Morgan.

AFI: Is there the space for SL women in the diaspora to be leaders in the SL community?

LD: Yes, for all the reasons above.

AFI: In your opinion, why are there so few SL women in parliament and decision making positions?

LD: [A]s a people, I don't think we've really thought long and hard about the rapid progress we can make in civil and human rights as well as development if we open doors that are closed to women, girls and the historically under represented. We cannot reach our full potential with half of our diverse skills and talent missing in action and underutilized.

AFI: What do you think needs to be done to change this reality?

LD: Close the gaps that weaken our communities.

AFI: In what ways do you think women's increased numeric representation in parliament and decision making bodies will change the status and lives of the majority of SL women? In other words, will they make an impact? How and why?

LD: Yes. By the time we get to parity, or have an increased number of women in decision-making bodies, I think many Sierra Leonean men would have experienced what Molara Ogundipe once called “a revolution in their kitchen". We would have gotten past many of our easy assumptions and cultural stereotypes; found the collective will to push forward with all of our greatest resource: people―men, women, boys and girls.

AFI:  What do you think are the most pressing issues for women in SL and the SL diaspora?

AFI: What can gender equality and parity advocates in SL do to succeed in their campaign for a 30 percent gender quota?

LD: Continue to communicate the message. Educate, inform and engage decision makers―men and women―who stand in the way of full participation of women and girls, poor men, the disabled and other minorities in the political and economic life of our communities