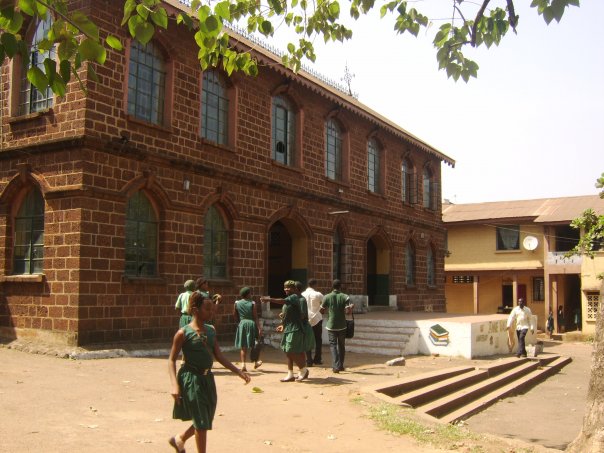 About a week after IWD on March 8, an ecumenical service will be held at the St. George's Cathedral in Freetown to mark the school’s day, but there are fears their birthday party may be overshadowed by the political wrangling over the school's future in the nation's corridors of power.

"I am deeply saddened by the threat posed to the Annie Walsh School building," wrote one alumna. "This is a historic monument and should not be demolished at will. The school pupils and parents along with members of AWOGA [Annie Walsh Old Girls Association] worldwide and Freetown should resist this attack on girl’s education in Sierra Leone."

"We’ve got to keep the school's legacy," said Marionette Cole, another AWMS alumna on the “Let's Save the Annie Walsh Memorial School Grounds” Facebook group started by Peagie Foday.

In the group’s introduction, Peagie wrote that it was created by The Annie Walsh Memorial School Old Girls to help in the fight to keep their current school compound as government proposes to relocate the school and build a market. "Remember this is heritage for Mama Salone, she said. “The first female school which has produced so many educated women."

Founded in 1816 by the Anglican Church Missionary Society (CMS), a small school for girls opened in the hilly village of Charlotte in Freetown, Sierra Leone with only eight students on the roll. Over more than a century the school has educated thousands of girls from all over the world with a few hundred currently attending the junior and senior high schools.

But AWMS is facing tough times in a country ranked one of the poorest in the world.

When the school was built about 200 years ago―in Charlotte and not Kissy Road― said Adwoa-Kitiwa Bultman, "the owners never envisaged population growth to be what it is today―congestion and other issues they are now facing in Freetown.  I was there just couple of months ago."

Another observer said Annie Walsh has failed to modernize, update or upgrade its buildings and grounds in the east end.

The East End of Freetown contains the city's largest population center and generally the poorest parts of the city, which saw fierce fighting during Sierra Leone’s civil war 1991-2002.Since peace returned there have been national elections and peaceful transfer of power.  But although the city of Freetown is governed by an elected city council, and headed by a mayor with executive responsibility for general management of the Freetown Municipality, the AWMS relocation plans are being negotiated by no less than the president of Sierra Leone himself from State House.

In response to a January 2013 letter from the secretary of the president, 21 representatives from the Annie Walsh Memorial School Relocation and Development Committees, and the Old Girls Association met the proprietor of the school, Lord Bishop Rev. Julius O. P. Lynch, on February 8th to put forward a position paper on the site's heritage, preservation, and its future.

"Our plea is that the current site remain in the education arena," the AWOGA members wrote. "The government should consider an alternative site for construction of the modern market. The proprietors and Old Girls had envisaged that the present site would be used as a vocational/technical /adult educational center for girls and women in particular to win them away from street trading and equip them for a higher standard of life. We hope that the school will not be penalized nor face negative repercussions in the search for relocation and its quest for preservation of the school's site as a national monument." they urged.

“What is the value of the buildings as historical relics?” asked one observer.  “Is[n't] it more about education, access, tradition, preserving the premier institution for educating the girl child in Sierra Leone since 1849?”

When members of the Annie Walsh Memorial School Old Girl Association  (AWOGA) Freetown meet on Monday, February 18th at the Beccles-Davies Hall in Cathedral House, Freetown, here are few things they will have to consider taken from the voices of concerned Sierra Leoneans:

"The problem here is requiring Government of Sierra Leone's help in AWMS's re-location decision. If the school stayed on the site and AWOGA advocated for a modicum of city planning around that area to preserve its cultural (including educational) heritage, that is understandable—in line with the move to clear Abacha Street to promote traffic flow and allow for a safer/more pleasant shopping experience."

"I thought the option being advocated by the relocation committee was to move the AWMS to a site that will be purchased by the government of Sierra Leone with funds provided by the taxpayer.  From what I understand, there are alumnae who want to take up the government’s offer (and have pushed for it because the school doesn't have the kind of endowment such schools have in rich countries and it's probably an easier route) but they also want to exercise the option to have a say in what happens to the listed building on the school grounds and for the campus to be maintained as an educational center.”

There is “absolutely no contradiction in AWOGA wanting to relocate and at the same time not wishing their site to be turned into a market.  Why would anyone consider those issues as either/or? Why is it so difficult to understand that a desire for relocation does not automatically downgrade the site to "forever thereafter unsuitable for future educational activity", if that is what the erstwhile users would prefer to happen there?  And why are we supplanting the unarguable sense of preserving historic buildings with the dubious sensibility of teaching the "elitists"- whoever they are - a totally irrelevant history lesson (irrelevant, that is, to the future educational needs, priorities and aspirations of our young people)?”

"This seems to be an emotional issue but I think we should look at it in a logical and detached manner. The bishop is not the proprietor but a trustee of the school so he cannot sell its buildings to anyone.  I am sure someone can get hold of the trust documents and start some action. Where are they registered? What are the terms of the trust? Does CMS still hold the property? These are facts that must be ascertained before things go too far.”