Sewa News 3/25/2013-The Peace Mission Training Center held a farewell ceremony at Hastings, about 15 miles east of Freetown, for members of the Leone 1 Battalion. The more than 850 soldiers, assigned to the African Union Mission in Somalia, will be away for nine months to a year.

One of the mandates of the African Union Mission in Somalia (AMISOM) is to monitor the security situation in areas of operation, help the citizens of Somalia and the government to enable them to regain control of the country in order to bring back and reinforce law and order.

On March 6, the Security Council extended for another year the mandate of the African Union peacekeeping force in Somalia, as it continues to consider a revised United Nations presence there, and partially lifted the 20-year-old arms embargo imposed on the country, UN sources said.

In a unanimously adopted resolution, the Council also requested Secretary-General Ban Ki-moon to continue the UN logistical support package for AMISOM, which will continue its tasks until 28 February 2014.

Created and operated by the AU in January 2007, AMISOM received a UN mandate from the Security Council the following month, and has been renewed ever since. It is mandated to conduct peace support operations in Somalia, which has been affected by conflict for more than two decades but which has recently made some significant political gains.

President Ernest Koroma poses for a photo with soldiers from Leone Battalion 1 of the Republic of Sierra Leone Armed Forces prior to speaking at a leaving ceremony for the infantry on March 25, 2013 in Sierra Leone. (All Photos by Jarrah Kawusu-Conteh)

In Dec. 2010 the government of Sierra Leone pledged to contribute 850 soldiers to the African Union Mission in Somalia (AMISOM) as the nation's contribution to global peace. A Memorandum of Understanding between the Government of Sierra Leone and the African Union was signed in December 2011 which committed Sierra Leone to deploy this infantry battalion and also committed the AU through UN to provide self – sustainment and deployment support to the Leone Battalion 1 in Somalia.


In his speech, President Koroma applauded the governments of the United State and United Kingdom for their invaluable support to making this possible.

"You are about to embark upon the great journey, a journey of peace, a journey of charitable gallantry, a journey to showcase how a transformed nation and its transformed military can be a force for democracy, peace, and reconciliation. The eyes of the world are upon you. The hopes and prayers of Sierra Leoneans everywhere march with you. We believe you will do us proud; you are an example of the achievements of this beautiful country on the West Coast of Africa. When you get to Somalia, let each and every one of you be an ambassador of Sierra Leonean goodwill, bravery and service.

The task ahead of you may not be an easy one. You will face an opposing force that may test your bravery, your gallantry, and your sense of purpose. But have this in mind: A lot has happened since AMISOM started operations in Somalia in 2007. AMISOM forces have largely reduced the opponent’s strength; the Kenyan and Ethiopian offensive has diminished the opponent’s capacity to disturb the peace. As part of AMISOM Forces you have overwhelming superiority in logistics, organization and global goodwill; your goal is lofty, your mission noble, and the tide is in your favor. I have full confidence in your training, your courage, your devotion to duty and your skill in ensuring peace wherever you go.

Let these three hallowed words “Duty”, “ Honour” , and “Country” reverently dictate what you want to be, what you can be and what you will be. They are your rallying point to build courage when courage seems to fail, to regain faith when there seems to be little cause for faith, to create hope when hope becomes forlorn.

Let us beseech the blessing of the Almighty God upon this great and noble undertaking. On this note, the nation bids you farewell, we wish you good luck, and by the grace of God almighty, the flag of peace shall be held high to the admiration of all the peoples of the world. God Bless the RSLAF; God Bless Sierra Leone.!" 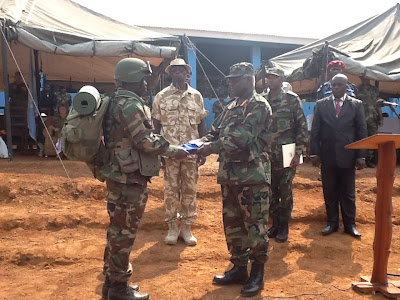 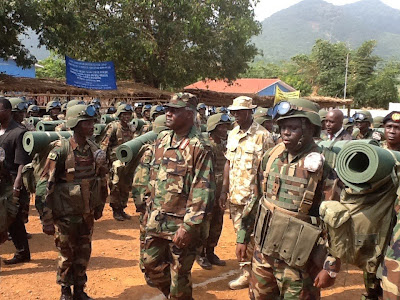