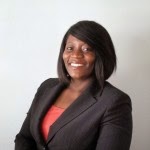 Andrena Sawyer isn't a household name just yet but remember you read it here first.The oldest of three girls, she was born in Freetown, Sierra Leone. Her family moved to the United States when she was nine years old, fleeing the civil war that left thousands dead and untold numbers maimed and internally displaced.

At age 15 and settled in her new country, Andrena founded "Teens Trying to Make a Difference," an organization for young people in central New Jersey. As a freshman at Howard University, she launched “Rock, the MIC,” an outreach for youth in Washington, D.C. These experiences, she told Sewa News, laid the foundation and defined her passion for bringing about change in the lives of people.

In an interview conducted by e-mail and on Twitter, Andrena talks about work, life, and business. Andrena is president and chief executive officer of P.E.R.K. Consulting.

I first got into consulting after a brief [period] in law school. At that time, I was going through some personal transitions and I began volunteering with a local organization that needed help getting off the ground. They ended up liking my services and referred me to other nonprofits in need of similar support. It was then that I realized there was a market for this work, and decided to leverage it by creating P.E.R.K. Consulting.

P.E.R.K stands for Passion. Experience.  Relevance. Knowledge. Andrena started P.E.R.K as a part-time business while she was working full time.

By far the most important career choice I have made was stepping away from my "traditional" office job to focus on building the company. In 2012, I'd reached a crossroads because P.E.R.K. was growing, but not to the level I knew we were capable of. I realized I could continue to put forth minimal effort in order to balance my fulltime job and build a business, or take a risk and see how far I could go with things. I chose the latter.


In the Sewa News Twitter interview we asked Andrena whether she realized she was an entrepreneur when she launched an organization at 15.

"I watched my father manage his own business, and it seemed like the hardest thing in the world! Back then, I thought I was going to be a civil rights attorney. The "bug" sort of fell on my lap. I started consulting to fill my time as I worked on going back to law. I ended up loving it, and decided to focus my energy on building a business doing what I love: nonprofit consulting," she tweeted.

Andrena's company specializes in capacity support for nonprofits and small businesses, as well as program development. Other services include business registration for startups, staff and volunteer training, fundraising and marketing and life coaching.

In addition to her work with P.E.R.K. Consulting, she is also an avid writer. She recently published her first eBook, The Other Side of Assertiveness. She serves as a liaison for IEDA Relief and as an Executive Board Member of the African Immigrant and Refugee Foundation and Project Dream BIG.

"I enjoy browsing sites that highlight what Africans are doing around the diaspora. It gives me a lot of encouragement to see what others in my generation are doing to reshape the image and challenge stigmas about the continent."


What next for Andrena?

"It's hard to say. There are so many ideas that go through my mind, but I never really know which one will be a "big thing." For now, I'm taking things one day at a time. When a seemingly good idea comes to mind, I run it by a few trusted people, and if things seem to be lining up, I take the leap of faith!"