Making A Positive Contribution to Your Community

Alhaji Saccoh, a Sierra Leonean born firefighter who lives in Philadelphia in Pennsylvania, went to Freetown, Sierra Leone, this Christmas to donate gear to a force in dire need of firefighting tools. But little did he know he would be using those fire axes, helmets, flashlights, gloves, boots, PPE, tools, and equipment on his vacation.

Early this week, Saccoh launched a fundraiser to help 8 firemen severely injured in a Christmas day inferno at a Shell filling station. Today he was doing more than passive fundraising.

Saccoh served as  a volunteer with the capital city's fire department in an incredibly rewarding way. He put himself in extremely dangerous situations, going into a burning building.  See some of the eyewitness pictures below: 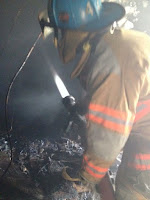 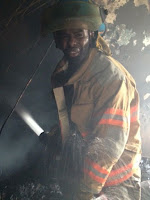 The building, which is located in the central part of the capital, Freetown, just a stone's throw away from State House, took the National Fire Force close to four hours to put out the fire.

Officials have however not yet given any possible explanation for the outbreak, APA said.

Part of the main Siaka Stevens Street, along which the facility is located, has been cordoned off from vehicular use, causing a serious traffic jam for the better part of Tuesday morning in that part of the city.

Sources say the fire mostly affected the fifth floor of the six-storey building.