Smile With Us School names house after Sylvia Blyden 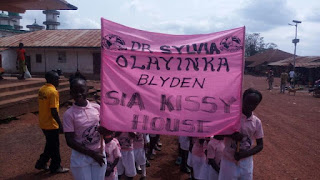 The Smile With Us Primary School has named a house after Dr. Sylvia. O. Blyden, Sierra Leone’s minister of Social Welfare, Gender and Children Affairs.

The new house, launched in time for sports day, is a sub-unit of the school, where each student is allocated to one house as a group or a team.

The house is also using the moniker “Sia Kissi” and will be identified by its symbol color, pink.

Sia Kissi house celebrates Dr. Blyden’s “exceptional work and contribution towards the empowerment and development of the entire Kissi kingdom, most especially for Kissi women,” the school authorities said.

The Smile With Us Orphanage is mainly for children who lost their parents during the Ebola virus epidemic in Sierra Leone in 2014, and other vulnerable children in the Koindu community of Kissi.

Koindu is a town in Kailahun District in the Eastern Province of Sierra Leone.

For more details, contact Mr. Simeon Sandy on either numbers below