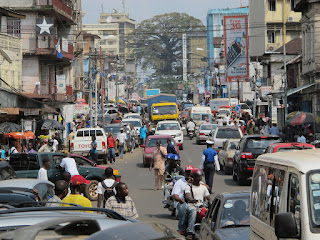 There is a need to rethink urban transport in Freetown. Improvements should be made to the infrastructure, revenue control system, and transport services.

The Sierra Leone Road Transport Corporation is the state corporation with responsibility for providing public passenger transport in Sierra Leone.


Since its creation in 1964, the SLRTC has been the dominant transport operator although they are in competition with private sector services providers ranging from large intercity buses, urban minibuses (poda poda) and more recently motorcycles and tricycles (Okada and kekehs).
Under current legislation, the Sierra Leone Road Road Safety Authority is responsible for designating public transport routes as well as set fare levels.

Section 35 of the Road Traffic Regulations 2011 places the responsibility on the SLRSA to license all public transport in Sierra Leone. The Authority is also responsible under section 41 of the same Statutory Instrument to designate the various routes allocated to operators as well as the amount they should charge for the various stages along the routes.
This mandate has not been successfully implemented by the SLRSA to date although in my opinion public transport fares should be based on market forces (supply and demand)

The rationale for change
The Road Transport Corporation will be better off setting driver and vehicle operating standards as well as monitoring the quality of services provided. Working with the Road Road Safety Authority, they should set standards and develop a zoning system and encourage private operators to provide services based on demand.

Some of their buses should be given to franchise operators in addition to those provided by individual and company operators. But for this system to operate we need a review of the system for public transport service provision.
For example, we should have direct services from Up Gun Turntable to Brookfields using the new hillside bypass; Up gun turntable to Waterloo with limited stops; Peninsula service from Goderich to York through Tombo with the final destination at Waterloo junction; Waterloo to Mile 47; Mountain Rural services from Wilberforce to Regent through Grafton and Hastings.

The key challenge will be for services operating between Congo Cross and PZ, and between PZ and Cline Town up to UpGun Turntable. But taxis and kekehs can provide an equally competitive service provided they were properly regulated.

All interurban services must start at Kissy and these services can also be franchised. The nature of demand and the route will, in turn, determine the number of buses/ minibuses (poda poda) required for the various routes.
Challenges facing urban transport services providers
Two and three wheelers are becoming the dominant system of public transport provision in Freetown. We could soon be faced with a situation in which a person could buy a new car but have nowhere to go as they would be stuck in traffic.

Other major transport challenges caused by this new trend in public transport provision include, but are not limited to:
• Problems associated with congestion
• Growing concerns about to air pollution
• Problems regarding carbon dioxide emissions
• Concerns related to increasing energy consumption with income
• Problems regarding safety and road accidents
Future planning should also consider the introduction of rapid transit services and other public transport modes.