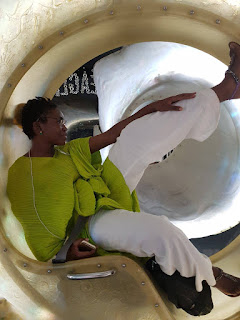 
Born in New Jersey on March 5, 1983, Adama moved to Sierra Leone aged four with her parents and later lived in Addis Ababa, Ethiopia. The Kargbo family returned to the United States when Adama was 10 years old.

After high school, she attended the Parsons School of Design in Paris before moving to New York.

In New York, Adama worked for Flaunt magazine and Magnet Management. She also spent her early career working on fashion campaigns for big brands like Versace and Prada, before striking out on her own. She moved back to Sierra Leone and launched Aschobi Designs.

Since its debut, Aschobi Designs has been featured in stories by Reuters, BBC and CNN, but it was during a recent Paris Fashion Week that Adama experienced her breakthrough fashion achievement by presenting her collection at the Hotel Bristol with influential retailers like Maria Luisa Poumaillou in attendance.

According to an obituary in Cocorioko, Adama passed away Wednesday, January 31st in New York. The cause of death is unknown at this time. She is survived by her father Sierra Leone's Minister of Finance Momodu Kargbo, her mother, sisters, and partner Jeremy Weate.