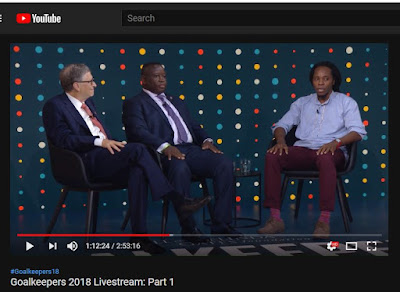 In 2015, one hundred and ninety-three countries at the United Nations agreed to 17 goals for a better world by 2030.  Guided by these goals, the Bill and Melinda Gates Foundation hosted the first annual ‘Goalkeepers’ event last September to help speed progress toward the global goals.

Moinina David Sengeh, now chief innovation officer for the government of Sierra Leone, was one of the 'goalkeepers' who joined co-chairs Bill and Melinda Gates at the inaugural Goalkeepers event in 2017.

This week, Sengeh hosted a one-hour segment at the second annual Goalkeepers Event hosted by Bill and Melinda Gates.

Goalkeepers are continuing the "audacious mission of accelerating progress towards the Sustainable Development Goals," Sengeh said.

In his opening remarks, Gates spoke about what the magic of software could do to change things and make the world better. He also said poverty isn't inevitable.

Since 1990, millions of people have overcome poverty. There has been an "incredible reduction" of poverty in places like China and India, Gates added, but can a third great wave of poverty reduction be created?

Gates warned that poverty is going to be a feature of life in places where there are few opportunities, a lack of stability, violence, climate change, and governance is not providing basic education and healthcare.

"People face some of the toughest circumstances in the most challenging places," he said.

To discuss how one of the poorest countries in the world is working towards delivering health and education for all, Sierra Leone's newly-elected President Julius Maada Bio joined Gates and Sengeh on the Goalkeepers stage.

Sierra Leone's population is pushing 7 million, with more than sixty percent of its people under the age of 30.

Bio's predecessor, Ernest Bai Koroma, made maternal and child mortality a priority over his two terms but the new president announced an even more ambitious list.

One of Bio's first appointees was Sengeh, as head of the West African country's first directorate of science and technology.

Born in a village of fewer than 300 people in rural Sierra Leone, Bio lost his father aged four and was raised by a mother who couldn't read or write. Ensuring he had access to education K-12, Bio joined the national army after high school before rising to the dizzy heights of a military leader after a coup.

Over the next 20 years, Bio earned an undergraduate and graduate degree in the United States before returning to Sierra Leone to run for political office.


"Sierra Leone is lagging behind," Bio said "but I have established a list of priorities. People and quality education are important. Any attempt to embark on development without human resource development won't work," Bio said.

Gates said places like Sierra Leone need vaccines for HIV and malaria, an improvement on malnutrition and digital tools to track activity.

"Health and education can be improved through digital tracking and getting money to the right people will make a difference," Gates added.

Gates said the special meet on the global goals could provide opportunities for people with personal capabilities and institutional capabilities to pair up with colleges and hospitals in places like Sierra Leone to spread best practices.

"Innovation has a big gap to close," Gates said, "but a world without extreme poverty is where everyone can dream."