'Whatever your hand finds to do, do it with all your might' 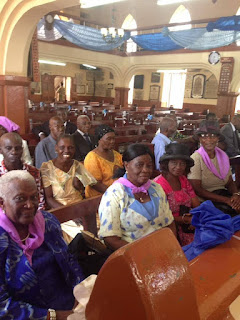 
Time marches on. It doesn’t stop for you or me. I figure the way we try to hold back constant change is by marking the fruits of our labor.

My mother, Hannah Iyatunde Deen, seen left in both life stage photos,  will be buried Wednesday, September 4, under a kapok tree in a village cemetery. She was a hard-working 81-year-old woman.

During her lifetime, she served her family, communities, and the world, in any which way she could. In the beginning, she wanted to be a hospital social worker. A dream probably spurred on by the humanitarian crisis of the Second World War in colonial  Sierra Leone, and glass-eyed British missionaries at the Annie Walsh Memorial School of the 1950s. When my mother’s childhood dream job didn't work out, she got married and started a family.

For more than 40 years, until her husband (my father) passed away in the dying hours of Sept. 30 and Oct. 1, 2005, my mother worked as a homemaker, typist, secretary, farm produce supplier, politician’s consort, and diplomat.

In the last decade of her life, she joined Mrs. Catherine Maurice-Jones and other volunteers, to support seniors at the King George’s Home, once located on Parsonage Street, in the Kissy area of Freetown, Sierra Leone. The King George VI Memorial Home opened in 1937 to house and care for soldiers wounded during World War II. My mother was born in 1938.

After the war, the British government handed the buildings over to Sierra Leone’s government. In 1988 a few concerned citizens formed the Sierra Leone Society for the Welfare of the Aged and took over the running of the home. The society promotes the welfare of older adults in Sierra Leone. The charitable organization also highlights concerns for the welfare of the aged and destitute as a matter of social justice, human rights and dignity. The society's aims and objectives include the provision of the shelter, support, and care for the elderly and the destitute. The home is run through fundraising activities, and donations from philanthropic nationals, institutions, companies, church organizations, clubs and well-wishers at home and abroad.

On August 9, 2010, Swit Salone published a photo essay “Aging Alone at King George” by Glenna Gordon, an American photographer, and journalist in Africa on the lookout for the ordinary and the extraordinary.

“I came across these images of residents of King George’s Home for the Elderly in Freetown and they moved me," Gordon said. "The elderly in Sierra Leone are so often hidden that we forget they exist.”