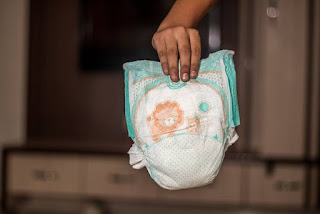 There is white tea, black tea, green tea, red tea—all kinds of herbal teas. And then there's a tea made from boiling disposable diapers. Yup. You read that right.

Some people in Freetown, Sierra Leone are boiling nappies to make tea. The trend has raised alarm bells and prompted one Sierra Leonean chemist to put out a press release on WhatsApp to warn people about the dangers.

The press release below is from Sierra Leonean chemist Alhaji S.K Bangura.

Dangers Surrounding the boiling of Pampers for the making of Tea*

A diaper is underwear that allows the wearer (mostly children) to urinate or defecate without the use of a toilet, by absorbing or containing waste products to prevent the soiling of the outer clothing or the external environment. When the diaper becomes wet they require changing.

However, for the diaper to performs its role, some chemicals such as Volatile Organic Compounds VOC (Toluene, ethylbenzene, xylene, and dipentene) are added. Other added chemicals are sodium polyacrylate or SAP, dioxins polyurethane, adhesive, lotions, inks fragrances, and pesticide residue.

Some of the chemicals used to manufacture these diapers are very dangerous. I find it hard to believe that some youths are now boiling diaper (s) and use the liquid like tea, without knowing some of the repercussions of the product they are consuming. Thereby endangering themselves and the environment.

As a chemist, I thought it fit to explain the effects of such chemicals.

Toluene: Breathing Toluene vapour in a small amount may cause a mild headache, dizziness, drowsiness, or nausea. Drinking toluene may cause sleepiness, stumbling, irregular heartbeat, fainting or even death. Toluene vapour is mildly irritating to the skin, eyes, and lungs.

Ethylbenzene is mainly used in the manufacturing of styrene. Acute (short term) exposure to ethylbenzene in humans results in respiratory effects, such as throat irritation and chest constriction, irritation of the eyes and neurological effects such as dizziness. The International Agency for Research on Cancer (IARC) has determined that ethylbenzene is a possible human carcinogen.

Xylene vapours are mildly irritating to the skin eyes and lungs.

Dioxins are a group of highly toxic chemical compounds that are harmful to health. They can cause problems with reproduction, development, and the immune system. They can also disrupt hormones and leads to cancer.

With the above dangers highlighted, I believe we can clearly see how these chemicals can destroy individuals and their environment. As citizens of this country, let's share this message to educate ourselves on the dangers surrounding the boiling of diaper(s) for the making of tea.

"Well, I hate to break it to you but a high level of chlorinated solution will eventually kill you. So rather than explain the neurological/physiological effect of imbibing sanitary pad water, and talking about 'dioxin, polyacrylate, toluene, ethylbenzene, etc.,' tell these kids that the “high” is a symptom of the dangerous level of compounds that will eventually kill them.  It is a sign that you are going to die. This is NOT like smoking weed.

"Poor teenagers in Indonesia have been doing exactly the same thing since 2018. Now, I don’t believe they know WHAT chemicals are giving them the “high” but from a quick Google search, it seems that they are going after the gel in these products. Rather than listing the ingredients and possible side effects — by the way, most household products and pharmaceutical products contain, albeit in low amount, these organic compounds — we should attempt to de-mystify the cause and effect.

"The Volatile Organic Compounds (VOCs) we list as dangerous may not be the real culprit. After all, they are volatile (will vaporize readily) and organic (don’t really care to dissolve in water). We should be concerned that most of these pads contain a high level of chlorine (as bleaching agent) and its related compounds like dioxins. It could very well be that the high level of chlorinated water is causing the high. Some Indonesian kids described their feeling as 'flying'"

Last year, French researchers tested 23 samples of different nappies on sale in France between 2016 and 2018. The report said it had discovered traces of dangerous chemicals in babies’ disposable nappies. Although the study did not name the brands found to contain the chemicals, it suggested they were well-known labels