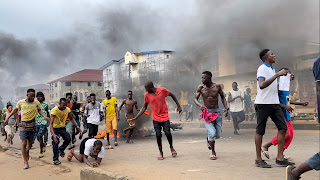 Mohamed Sorie Forna and fourteen others were executed in Sierra Leone on July 19, 1975. I remember the date because my late father, driving us home, decided to go past Pademba Road. He was a Sierra Leone Daily Mail reporter in the 1950s.

I have never forgotten the sight of bodies hanging on the high concrete wall towering over the prison.

As I grew older and understood more of what I saw, I realized that there is reason developed countries choose not to display executed souls for all to see.

By the time, Hindolo Tyre, a Fourah Bay College student president, was thrust into the role of leading a nationwide protest, which galvanized support from the labor unions, I was distracted by foreign movies like Network.

What I remember most about it was that before Howard Beale's sermons on the dehumanization of society, he asked viewers to shout, "I'm as mad as hell, and I'm not going to take this anymore!" from their windows. Gosh, so many people I knew were silently screaming the same line in Freetown and across Sierra Leone.

By the mid-1980s, we heard of wars and rumors of wars. So, when the 11-year civil war in Sierra Leone began on March 23, 1991, the attrition war on Sierra Leonean institutions had worn down a generation of idealists.

By most accounts, the Sierra Leone Civil War was one of the bloodiest in Africa, resulting in more than fifty thousand people dead and half a million displaced.

"Excellencies, heads of state of ECOWAS represented here, members of the board of negotiators, excellencies members of the diplomatic corps, distinguished ladies and gentlemen," began President Ahmad Tejan Kabbah during the signing of the Lomé Peace Accord on July 7, 1999. "Today is a very important day for Sierra Leone," he continued. "You heard the civil war in my country is at an end, and we have all resolved that never again shall we resort to violence to settle matters of political importance." 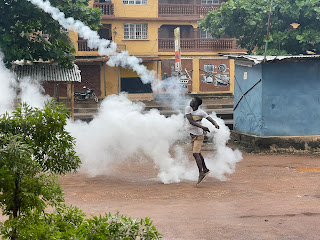 Fast forward to August 10, 2022. Please note a child born in Sierra Leone on the day Sierra Leone's wartime president made his most memorable speech is now twenty-three years old.

Now, take a good look at the young man in the photo. He could be twenty-three. He could be older. He didn’t wake up thinking of it then, but he has gone into history. He was hurling a tear gas canister back with such agility.

I wish, though, that he had seized a day to use his athleticism at, say, the Commonwealth Games or to coach young Serra Leoneans to jump a little higher and throw even longer distances.

That said, my photo of the day also features the young. Most of whom make up a significant percentage of the sprawling population of Freetown, the capital city of Sierra Leone.

Predictably, they were in the majority at the protests. Note the peaceful young people you see in photos circulating on social media. Like the almost Boy Scout crowd led by a boy with a massive flag of Sierra Leone. Contrast their innocence with the grainy photo of the angry men who hammered the fallen police officer with sticks and stones as he lay dying. A sight that would make Tejan-Kabbah roll over in his grave.

Ever the optimist, I feel he might pause at my photo of the day.

When the firing started and groups began to run for their lives, one photographer saw a woman take a tumble. But pay attention to the men.

Some turned around, one reached out with both hands to help, and others stopped in their tracks with concern.

Those running Sierra Leoneans are far from the mob that lynched the fallen police officer.

Remember the Fred Rogers quote? “When I was a boy [read child] and saw scary things in the news, my mother told me, "Look for the helpers. You will always find people who are helping.”