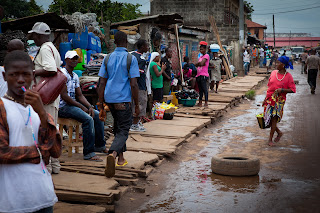 The Sierra Leone Association of Journalists (SLAJ) was founded in1971 primarily to promote freedom of expression and the press, to seek the welfare and protection of its membership, and seek training and capacity-building opportunities for its membership.

After 50 years, how does the current president, Ahmed Sahid Nasralla, plan to engage representatives from digitally literate countries that make up the international community? How does he expect them to strengthen a media landscape lagging behind current thinking or trends?

A month ago, the Twitter feed of the SLAJ president was paying a lot of lip service to the launch of the Citizens Manifesto Report and the organization's support of initiatives that put citizens’ priorities at the top of the agenda for the 2023 elections in Sierra Leone.

The Aug 10 protests, which later turned deadly, gave the SLAJ president a more urgent reason to speak about the economic base, public order, and protecting citizens and their freedoms.

"Pipe down" (Shut up, stop talking, and be quiet)

“We need to pipe down as a nation,” said Nasralla, publisher of a satirical newspaper. “We are playing too much politics,” he added in a reprimanding tone.

Even as Nasralla appealed to the higher ideals of democracy, he claimed that the differing views in "politics is diverting and distracting the government from focusing on the New Direction you promised Sierra Leoneans,” Nasralla said of Julius Maada Bio, president of Sierra Leone.

The document code for Sierra Leone’s latest Poverty Reduction Strategy Papers (PRSP), prepared by the World Bank and International Monetary Fund, is “The New Direction” and covers January 2019 to December 2024.

In his speech, Nasralla celebrated Sierra Leoneans’ core values of hard work and dignity in labor, and he paid tribute to excellence, dedication to duty, and trust.

However, he dismissed his fellow journalists in the SLAJ as a “very troublesome community” while admitting that he could not solve the problems of the media because they are many.

A recent country report from Reporters Without Borders (RSF) states that while most media outlets in Sierra Leone are free of direct control by politicians, the media are in fact under politicians’ influence due to their lack of financial resources and inadequate management.

“Images of the violent protest were shown on international media screens worldwide,” the SLAJ president lamented. “And now they are also showing images and reporting news stories of extrajudicial killings, unlawful arrests, and detention of civilians. This is not good for our country.”

Insult comedians and disrespectful activists are enemies of the state

Turning his attention to the opposition, Nasralla said, “I don’t remember the opposition condemning and calling on the public to disregard the invectives, inciting videos from  Adebayo and the likes, all of which makes the elected government unpopular.”

Some YouTube commentators disagree about the power and reach of the self-styled king Adebayor, chief executive officer of Lov Salone Lef Badheart, an insult comedy gig operated from Europe.

On YouTube's Wi Yard Aug 13 edition, the talk show host asked if Adebayor was on the run in Holland, as he was a wanted figure for inciting the protest in Sierra Leone.

The Secretariat and Executive of the Sierra Leone Peoples Party (SLPP) have listened to audio published on Friday 18th March 2022 from overseas by a notorious person using the nomenclature of 'Adebayor' and in which direct death threats are made...We, therefore, call on the Security Forces to investigate this particular audio. We further urge the relevant authorities to activate international collaboration in enforcing the recently enacted Cyber Security and Crime Act, which gives cross-border powers to legally handle such threats delivered through social media. The SLPP will also explore all diplomatic and other means to bring Adebayor the culprit, to face the full penalty of the law - locally and internationally. Meanwhile, we appeal to our supporters to remain peaceful and law-abiding and not choose the path of revenge or retaliatory threats. We admonish them to continue with messages about the development strides of this Government and this President for an emphatic victory in next year's elections.

According to Organiser dot net, Adebayor's campaigns are welcomed by a cross-section of Sierra Leoneans. Adebayor's insults have earned him notoriety as "the most disrespectful activist in Sierra Leone's history," Organiser said.

Don't put your mouth where your money is

Nasralla believes the diaspora, made up of hundreds of thousands of people around the world, do nothing but share unflattering audio and videos of politicians in Sierra Leone because they have unlimited data.

He also accused Sierra Leoneans abroad of starting unregulated online TV shows, radio, and Facebook Live programs to talk about issues at home that they know little about.

After months of social media leaks and dumps of government documents by the Africanist Press, Naralla allowed that while the diaspora was "blessing Sierra Leone through their endless and much-needed remittances to family members and loved ones to help cushion the difficult economic situation,” they also needed to pipe down.

The SLAJ president wants Sierra Leoneans abroad to spend their hard-earned money to improve the situation in the old country, but he doesn't want them to feel obliged to put their mouths where their money is.