No one knows for sure how the fire started. But by 10:00 o' clock Thursday, Freetown time, the inferno was raging in Angola town.

Thankfully, no one died and nobody was injured but hundreds of people lost everything in the blaze. 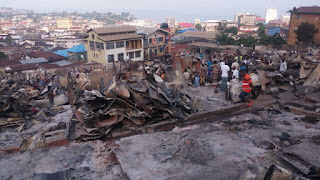 The Angola town community, which was built up around the old and narrow Fort and Soldier streets left behind by the colonials, is gone.

One woman, who sells at the market and had all her vegetables destroyed, said they saw fire coming from a neighbor’s house. She also said they couldn't put out the fire because crowded houses were so congested, with many of them made out of corrugated iron and zinc sheet shacks. The fire hose attached to the fire engines weren't able to put an end to the fire at all. 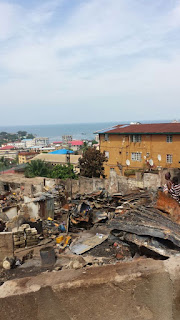 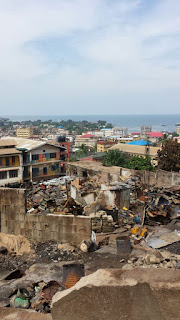 Some of the residents have gone to friends and relatives, hoping to find refuge. Others are wandering around looking for a place to go.

“There are two locations in these photos,” said Sylvia Blyden, Sierra Leone’s Minister of Social Welfare, Gender and Children Affairs.

“One is at my ministry stores at New England Ville and the other at a private school compound located near the Fort Street disaster area. We are using the school compound as a distribution site. “

Blyden served as special executive assistant to President Ernest Bai Koroma from 2013 to 2015.