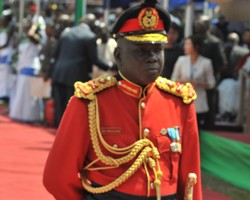 The news broke early Thursday morning that Sierra Leone’s former chief of defense Samuel Omar Williams was fatally shot in his home in the eastern part of the capital, Freetown.

According to reports, the Sierra Leone Police is currently at the scene investigating the shooting.

MambaTV has been talking to several people both in Sierra Leone and the diaspora regarding the shooting.

“The shooting raises several questions. And given Williams' background, his role in the country's recent history, the details surrounding his departure from the army, and the current political climate in the country, several theories have emerged about a possible motive behind his shooting death,” MambaTV said.

“As one caller to our studio puts it this morning, "Who's safe in a country where a former Chief of Defense Staff can be shot dead in his home?"

The government has condemned the killing.

In April, Awoko newspaper reported that the former chief of defense staff,  retired Lieutenant General Samuel Omar Williams appeared in court as prosecution witness in a preliminary investigation at Magistrate Court No 1.

According to police reports, on May  26, 2015, the accused maliciously damaged property worth over sixty million Leones (Le60m) belonging to the former CDS, the paper said.

The police report states that the accused damaged retired Lt General S. O. Williams’ wall at Cockle Bay, Murray Town. In response to a report made by the former CDS, the accused were arrested and charged.