Freetown Sees A Spike in Violent Crimes During December 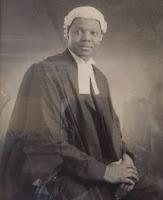 Robbers who broke into a house in Marjay Town in the west of Freetown strangled the 78-year-old owner and tied up the maid.

According to the Sierra Leone Telegraph, some suspects were arrested at Funkia Junction, a few miles south of Marjay, driving the stolen vehicle of Imran Rahman, who presided over Freetown Magistrate Court No. 1  during the Tejan-Kabbah administration.

"His murder has once again raised serious questions about the ability of the government, as well as the capacity of the police in maintaining law and order in the capital Freetown. How safe is Freetown tonight?" The Telegraph editorial asked.

Magistrate Rahman's killing comes just two days after retired military chief Lieutenant General S.O. Williams was shot dead by armed men at his home in the east of the capital.

According to Sierra Leone Telegraph, Barrister Rahman comes from the storied Rahman family in the Foulah Town community of eastern Freetown.

The majority of Marjay Town’s residents support themselves through fishing, working as construction laborers, or by engaging in small-scale trading.