Is Sierra Leone's Election Over Yet? 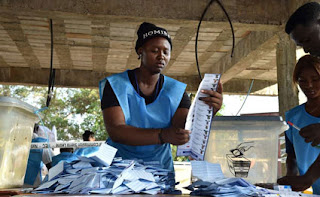 Sierra Leone wasn't always known for going to court any given day, but a tense election has seen more lawyers suing the government than ever before. Now the writs have finally settled the run-off date for Saturday, March 31st, one observer thinks the National Election Commission (NEC) may have protested too much.

"This situation is not as complicated as the NEC is trying to let us believe," transportation analyst Victor Mengot said.

"There are on average 300 voters per polling station," Mengo explained. "All they need is 4 personnel per Polling Station to complete the process."


By Mengot's calculation, it will take less than twenty minutes for Person A to sort out 300 votes.


Person B will then take no more than 30 minutes to count the votes,
Person C will take another 30 minutes to do verification,
Person D will take only 10 minutes to enter the result in the reconciliation and result form (RFF) to be signed by Polling Agents/Observers.

The whole process will be no more than an hour and a half, argues Mengot.

"Each Party agent will have a photocopy of the signed form for onward transmission to their Party headquarters for aggregation," he added.

Mengot says he sees no reason why the next President should not be revealed by 8.00 pm on Sunday, April 1st, after verification of RRF forms at District Headquarters.

"How long will it take a bank teller to count Le 1 million in denominations of 10,000," Mengot asked rhetorically.  "No more than 10 minutes so what is the big deal?! "

A retired Sierra Leonean-American Marine Corps officer, who recently graduated with a Ph.D.in political science, isn't so sure.

Dr. Osman Kabba thinks the incumbent party is up to its old shenanigans. They're simply playing for time, he said.