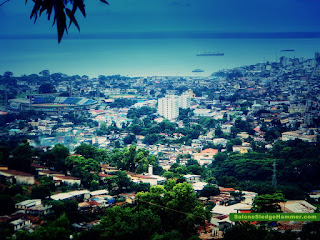 World Health Day was first celebrated on April 7, 1950. According to the World Health Organization (WHO), since then, the WHO has aimed to create awareness of a specific health theme to highlight a priority area of concern.

Past themes include protecting health from climate change, road safety, and healthy environments for children. World Health Day 2009 focused on the safety of health facilities and the readiness of health workers who treat those affected by emergencies. I chose to focus on Sierra Leone's need for a national alliance for mental health. My op-ed was first published in The Patriotic Vanguard, 7 April 2009.

This weekend, the All Peoples Congress Party of North America held a fundraiser in Maryland. In the interest of full disclosure, I am not a member of APC North America, but I planned to buy a ticket and support the event. Unfortunately, something came up at the last minute, and I did not make it. Still, I am rather curious to know which Sierra Leonean cause they will donate to. A few come to mind: Income generating projects for youth, sustainable empowerment of women, adult literacy, job skills training, educational improvement, and health care.

See, some months ago, the APC of North America announced that in support of President Koroma's "Agenda for Change," APC-North America would embark on what it called "unprecedented fund-raising efforts to renovate Kissy Mental Home." A news article reported that the North American branch of the APC party had donated the sum of US$10,000 for the renovation of the psychiatric hospital. Two former members of APC-NA, Martin Bash Kamara, and Khadija Sesay were said to have oversight of the funds and ensure the completion of refurbishment work at the mental institution.

I think more by happenstance than design, Kissy Mental Home was under the spotlight in a British documentary series. In last Friday's Channel 4 broadcast of "Sierra Leone: Insanity of War," Unreported World's Seyi Rhodes and director George Waldrum found what the world already knows: a population of more than six million people, hundreds of thousands of which have witnessed a rape, torture, and executions are served by just one psychiatrist.

Dr. Edward Ali Nahim has been a consultant psychiatrist at the Kissy Mental Hospital since 1981. As the head of the hospital, he treats all patients. According to his biography, they include 100,000 patients with problems of drug abuse, 40,000 with either epilepsy or mental disabilities, 20,000 people suffering from PT-SD (post-traumatic stress disorder), and 100,000 patients with symptoms of major depression and schizophrenia.

The amputees interviewed in "Sierra Leone: Insanity of War" said that horrific memories still haunt them despite being treated for their physical injuries. They find it hard to express themselves. All they know is that sometimes things get so bad; their lives grind to a halt, the filmmakers said.

In Kailahun, where the notorious "Killing House" still stands as a testament to the bloodiest period in our contemporary history, Rhodes and Waldrum were told by a charity worker that 50 percent of those he helps had attempted suicide. Sayon, an ex-child soldier, who was forced to kill at just ten years old, said he hears the screams of the people he murdered - and last year, he tried to take his life.

Back at the Kissy Mental Home, we saw sights that could have come right out of medieval times. Most of the patients are chained to their beds and heavily sedated.

For someone who has been closely following the life and times of Kissy Mental Home, it seems not much progress has been made. The scenes in "Sierra Leone: Insanity of War" were much like those I had seen in a similar documentary shown on Al- Jazeera television in September 2007. One viewer who watched the same program said the experience was "most horrifying and most depressing," adding, "The camera showed patients chained to their beds and interviews with Dr. Nahim, who says 40 percent of the [Sierra Leonean] population needs psychiatric treatment, and that the stench of blood will remain with many for the rest of their lives."

The Al Jazeera reporter lamented the treatment and conditions of the hospital, observing that chaining of patients was outlawed as early as the eighteenth century. "Mr. Kabbah calls it a modern psychiatric hospital but should any of his best friends or members of his family need psychiatric treatment, he would surely not send any of them there," observed the viewer wryly.

At the reopening of Kissy Mental Home in December 2006, President Kabbah said, "The hospital is now a modern psychiatric hospital and the best constructed in Sierra Leone today. It is supplied with all the basic psychiatric drugs necessary to treat patients, two vehicles, four hundred beds and mattresses, hospital furniture, computers, photocopiers, and a good kitchen. The people with a mental health condition will now enjoy their stay while receiving treatment."

Facelifts do not always provide a complete makeover

When author and commentator, Aminatta Forna, visited the hospital to research a book, she told a British newspaper afterward that the one question that fascinated her was whether one could diagnose an entire country as suffering from PT SD. She wondered, too, whether Sierra Leone's colonial experience had induced a form of madness.

Perhaps it is time for us to wonder whether the eleven-year war left all Sierra Leoneans crazy. In the words of that haunting Gnarls Barkley song: Does that make me crazy? Possibly. I can remember losing my mind when Ken Moore was killed during a botched demolition exercise at a squatter settlement. Moore's hands were tied. He was gagged and was reported to have stab wounds in parts of the body that must have caused him unimaginable pain.

In his outgoing address, President Tejan-Kabbah spoke about the large proportion of young people suffering the consequences of the war where some of them were cruelly exploited and forced to serve as brutal soldiers. Tejan- Kabbah also said rapid urbanization had produced troubled youth among whom unemployment and substance abuse are common. In 2004, the nation concluded demobilization and disarmament of ex-combatants and reintegrated more than 71,000 ex-combatants, including 6,845 child soldiers, into active community life.

In her first interview as the first lady of Sierra Leone, Sia Koroma, a British trained psychiatric nurse, said she intended to use her status to focus attention on the Girl Child and adult literacy and mental health. With an estimated 400,000 mentally ill people in Sierra Leone, the first lady has her work cut out.

A World Health Organization (WHO) study released in March 2009 said that although the violence that nearly tore Iraq apart in 2006-2007 has largely subsided, many Iraqis remain traumatized by those years. The study, which surveyed 4,332 adults, found that 16.5 percent of Iraqis have mental health problems, but only 2.2 percent of those had received medical treatment. The survey also found anxiety and behavioral disorders had afflicted Iraqi women more than men.

According to Dr. Nahim, nearly 80 percent of those in need of help in Sierra Leone believe evil spirits cause mental illness; it will take a sustained information and awareness campaign to change traditional attitudes to mental health and the causes of mental illness. But if Sierra Leone's war made psychiatry a medical emergency, our government does not appear to treat it as such. "Sierra Leone: Insanity of War" is saying it's time political leadership engaged the nation-carers, healers, medical practitioners, and Kissy Mental hospital in a conversation on mental health, which brings me back to the APC - North America.

What if APC- NA could oversee a drive for a multidisciplinary team to help upgrade care at the woefully understaffed Kissy Mental Home? Across the Diaspora, Sierra Leonean psychiatrists, nurses, occupational therapists, social workers, and community care workers are ready to be part of the change at the old mental institution.

To borrow a line from the Transition Team Report: "It is time Sierra Leone's Mental Health Service is brought into the 21st Century. Sierra Leone is possibly the only country in the world that chains people with a mental health condition to their beds."