The Politics of Land Grabbing in Freetown, Sierra Leone 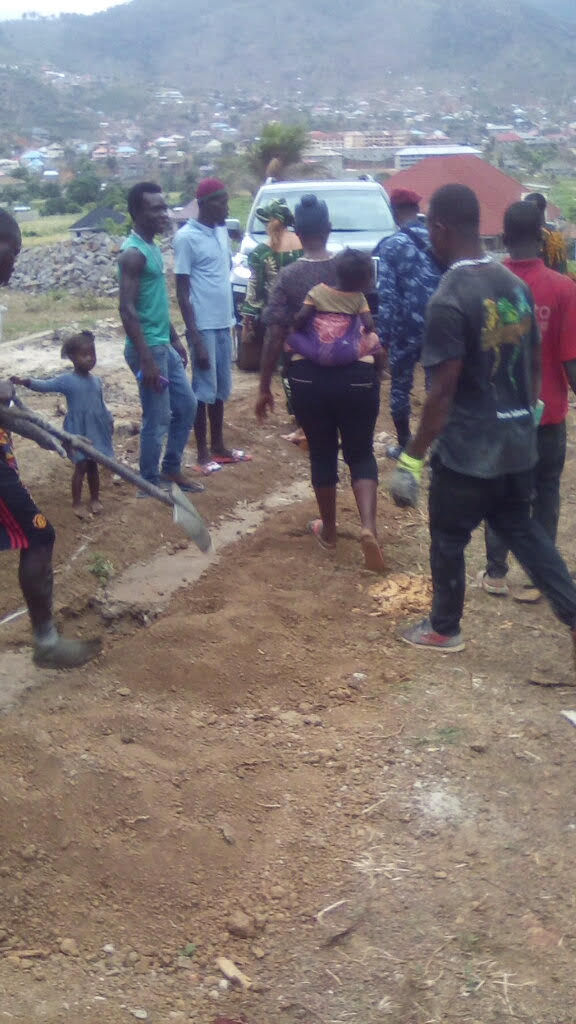 Tracey Marke's grandfather was a prominent lawyer. He owned property in Hamilton, Freetown, and his son, Tracey's father, worked hard as a businessman to become the most prominent landholder in Hamilton in the 1960s.

There was a stretch of wetlands in Hamilton called "Portoh" that was used by the community. This area was eventually grabbed by local politicians, depriving Hamilton villagers of valuable food planting land.

"After learning about how Prince Harding and his wife Anne Marie had been trespassing, I got a fence erected to protect the land," Tracey wrote in March 2020. "When Prince Harding and his wife realised what was happening, they went to my caretakers with thugs. They threatened to break down Josephine Soya-Bongay's fence.  I wasn't too worried about this threat as it would be impossible to traverse land belonging to Josephine to get to mine without destroying her fence or gates.

"In March 2020, I was told that Mrs. Anne Marie Harding, in conjunction with Mr. James Massaquoi, who is apparently building near the Hardings; plus two members of the lands ministry to include a Mr. Salifu and Mrs. Harding's OSD brought in a bulldozer and destroyed Josephine's gates that were keeping out tippers that did illegal sand mining on the beach."

The Operational Support Division (OSD) unit supports the general duties of police and is trained to perform high-risk duties including controlling riots, and violent protests.

"The bulldozer knocked down pillars, mature trees, flowers, brush, and scraped all the vegetation to make a large access road right through my land. Mrs. Harding claimed it was her right as they were now in power."

A letter from the Ministry of Lands was sent to my lawyers on 4th June. One day after Ministry of Lands official Salifu (who claims the Minister of Lands authorized him) in concert with the complainants, Prince and Anne Marie Harding's thugs demolished my fence.


Is this the new Lands Courts we were promised, where the new purveyors of justice are thugs belonging to renegade political "complainants "who use might and influence to go into private properties, without any form of warrant, usurping the job of courts?

Are we to allow this to stand? Is this acceptable behaviour by government officials, institutions, and politicians?

Have we reached a stage where politicians feel so brazen to go into private properties in concert with state institutions and proceed to demolish and criminally destroy a fence building effort of a Sierra Leonean who held a valid fence permit for her land, who was doing what any sane individual would do — try to protect their land?

Is it alright for women, workers landowners to be harassed, threatened, assaulted, and abused on privately held land, for which Prince Harding has been issued legal trespass letters?

This letter throws up more questions than answers and shows rather belatedly attempts to cover tracks by creating a shoddy narrative. It shows how far we are going deep into the swamp, decapitating institutions meant to serve us all without fear or favour.

This does not auger well for safe, strong, or just institutions working in the best interest of all they are meant to serve. Instead, we can see the lines blurring where official government institutions are being hijacked for ambitions and a ministry more interested in protecting two politicians rather than seeing justice served.

Some questions for the Lands Ministry:

Do they do due diligence and look at their records rather than trying to throw impediments at people. What happened to the blockages meant to be unblocked in the New Direction I believed President Bio meant well?

Why are they sending a letter a day after they have criminally demolished my fence requesting removal of blockage when they have done the job?

Has anyone asked to see the SLPP Chairman and Chairman of National Privatisation Prince Harding and Deputy Minister of Mines Anne Marie Harding's papers showing their access road? Especially, more importantly, their access road over my land.  And have they asked why Prince and Anne Marie Harding have not discovered the legal trident of the land. Are they not meant to be the beacons shining the light carrying forth the President's plan of making safe, effective, and just institutions instead of a thug is might and corrupting state institutional processes? 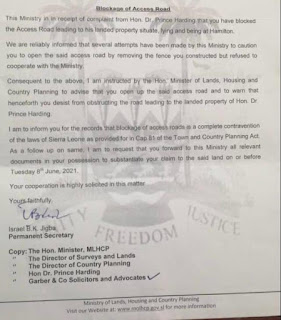 Can the Ministry produce reliably informed evidence from within their department showing how they made their decision that I was blocking Prince Harding's access road on land belonging to me?

Can I request they produce their reliably held evidence that the Ministry has made several attempts of Lands to advise my lawyers or me to open the claimed access road that I was blocking?

I ask these questions in earnest as the mind boggles when and where these several attempts were made, seeing as fence block erection only started on Tuesday of this very week, and before that, there was no blockage.

I will have more questions for them in due course as I believe we need to demand better from our institutions meant to serve us the people and believe justice will and should prevail and should be a right afforded to each and everyone in this land.

Also read: "While the world is busy getting through the pandemic, this happened in Freetown"