July 22, 2013
The Sierra Leone Football Association's elective congress has been postponed for the second time by the Normalization Committee reports Sahr Morris in Concord Times. According to the SLFA public relations officer, the decision to postpone the election, from July 27 to August 3, 2013, was made to allow for district and regional football associations' elections to take place July 24 to 27. This latest decision will now see the Normalization Committee's mandate―which was to end on July 31―extended further, Morris said.

This is not the first time the SLFA congress has been postponed by the interim committee which took over the affairs of the SLFA last December following disagreements over who was eligible to contest for the presidential election.  The normalization committee, set up by the world football governing body, FIFA, to administer the game in Sierra Leone has assured the elections for a new executive to run the affairs of the national football league and the national team will be held August.

But next month may not come soon enough to quell the flurry of stories revealing the hits various campaigns are taking as the three people who would be president let the public and delegates know where they stand on crucial questions about football. Sewa News hopes to provide everyone with a chance to better know the candidates running for president of the SLFA, which was founded and affiliated to FIFA in 1967.

Last week, Sewa News invited Isha Johansen for a dialogue and conversation. Today, we're pleased to have another candidate who plans to help decide the future governance of football in Sierra Leone. Rodney Michael won an appeal last September against his disqualification to run for the Sierra Leone Football Association Presidential race. 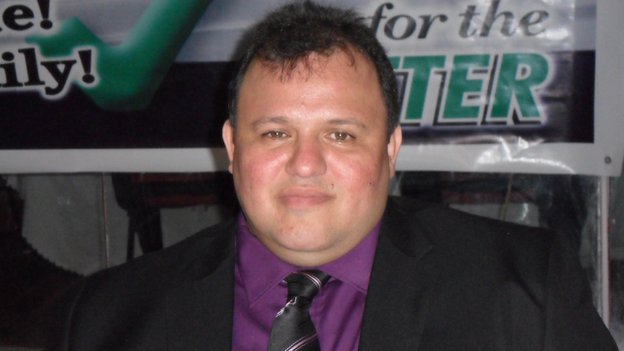 My name is Rodney Edmond Michael and I am a contender for the Sierra Leone Football Association presidency.

I hope to serve the nation and work for the good of the game. To ensure resources we receive are used to decentralize administration of the game and in so doing empower the regions and the districts to be efficient; to introduce stringent financial and administrative accountability. To encourage more women to get involved and provide an opportunity for them to control female football; develop a youth scheme so that the best are catered for with scholarships and other facilities; to ensure equal opportunity and adequate courses for administrators, coaches and referees; to plan properly for all international competitions and provide the appropriate and conducive atmosphere for our national teams to succeed.

Football in particular and sports in general has always been a passion for our family. My mother was a national tennis champion for over a decade and my younger brother represented Sierra Leone at youth level in both football and tennis. As a kid in the late 70s, watching Max Macauley and Ali Gainga in Bo was probably a key influence. Since I was unable to play the game competitively, I opted to join the Bo District Football Association as an administrator to fulfill my passion and serve my community in 1986. I was 14-years-old.

I went all the way to university and was pursuing a law degree at Lansdowne College (an affiliate of University of London). I opted for a one-year break in 1994-5 when my father died on May 18th 1995. During the break I was learning about the diamond industry and as I could no longer afford the fees in the U.K., coupled with the fact that I was more relaxed at home, I opted to forego my education and entered fully the competitive diamond trade.

I have always loved calculations. In 2002 I was doing some minor repairs to my house when I got into learning how bills of quantities were prepared. I decided to form a company and got actively involved in preparations of bills of quantities and other estimates.

As owner and managing director, I am in charge of all financial and administrative decisions, supervision of full time employees, submission of tenders and negotiations of contracts, negotiations for all banking facilities and other major administrative responsibilities assisted by my departmental heads.

I love the challenge and the responsibilities. It keeps you on your toes and in search of contracts and jobs. You are never idle and the onus is on you to be innovative and use your initiative for the company to grow and stand out amongst the hundreds of other companies in the same industry.

My only dislike is running after payments. Most times you borrow from suppliers or banks and when it is time for payment there is some delay from somewhere and there is very little you can do. You end up paying so much interest and spending so much to chase payments. Some contracts end up a total waste of time.

Over the last few years I have concentrated on supporting the various regions and districts in promoting and developing football games and so many have benefited from my contribution.

Currently I am the CEO of Edmond Michael Foundation which has thirty senior and one hundred and twenty junior players. We also have thirty girls. My job is to finance the team and determine the kind of competitions they should participate in. We also help as best as we can with their medical and, for some, their education. It is totally financed by me.

Football is the passion of the people. Sierra Leoneans are very supportive of any and every one financing and contributing to the game. The public really appreciates and because of that it gives one the courage and satisfaction to stay in it. There are lots of challenges but I would say the most difficult obstacle is sponsorship as few companies are willing to invest in sports. We have to design a policy with government’s support that will convince corporate houses to see the need and significance of sponsorship.

The journey has been long but very educative and the experience has been extremely wonderful in spite of some of the challenges. The best has been the friends I have made on the way…some of them are now more like brothers and sisters.