Since 2004, Isha has been the chief executive officer (CEO) of Johansen Football Club. FC Johansen, which takes its name from Isha's Norwegian-born husband, Arne, is not just one of Sierra Leone's premier football teams. It's billed as one of the most successful youth clubs in the country. Without a doubt,  another model of an Isha entrepreneurial venture.

"It [FC Johansen] started off as a humanitarian project in 2004; a couple of lads between 9 and 11 playing football literally all day and most of the evening outside a dirt pitch close by where I live. What began as a few leones for bread and drink soon became a football and before I knew it, I had a team of scrappy little boys lining up outside my home calling themselves FC JOHANSEN. It’s a scene I remember as if it were yesterday.

"I am immensely proud of my boys. We have come a long way as a team. My boys are not just players, they are my kids and FC Johansen is a ‘family.’ I would like to believe that, once in the family, an FC Johansen player learns the value of caring, sharing, integrity, and above all the importance of self discipline. No matter how good or talented a player is, I believe if he lacks these values, it hinders progress as a successful player."

Isha enjoys her role of mother and big sister, proud of seeing her boys on and off the pitch. She calls them a  “a unified and disciplined group of youngsters who have weathered the storm and grown into fine young men, sports ambassadors and household names in Sierra Leone."

"I am downcast when we lose a match, but that is a rare occasion so thankfully it's not an experience I have to endure too often."

As the only woman in the hotly-contested Sierra Leone Football Association presidential elections slated for July 27, Isha has had to endure the mudslinging and smears of a long, fractious campaign. One of her peeves she says is seeing the beautiful game tarnished.

Her advice? "Come into Sierra Leone football with the sole aim of giving your best in the hope of making a meaningful contribution to society. Try to focus on the youth for that is where Sierra Leone’s future lies in terms of education and sport."

On her future, Isha is just as sanguine.

"The Almighty has the answer to that. I started off with a humanitarian project nine years ago involving twelve scrawny kids. Today the team is undoubtedly the most successful club in the country. Internationally, the team has gone a long way in promoting Sierra Leone’s image from being a war-torn doom and gloom nation, to one where the country and its people are on the mend and ready to go! Today, I am also contesting for the highest seat of football in Sierra Leone. All I know is that whatever the outcome, Sierra Leone is about to experience the dawn of a new era in Salone football!” 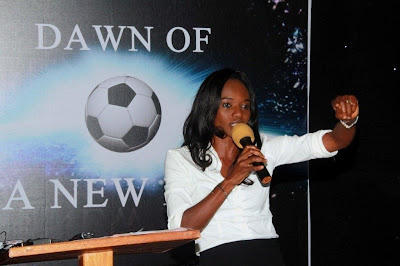