Many citizens have risen up to the challenge of fighting Ebola ... From health workers to Paramount Chiefs, teachers, police officers, religious leaders, and ordinary citizens. --President Koroma, July 1, 2014


Almost halfway through the rainy season in Sierra Leone we remember when the nation was in the midst of its worst cholera outbreak in 15 years. On September 19, 2012, the World Health Organization (WHO) reported more than 19, 000 cases and 274 deaths. The WHO and Sierra Leone’s Ministry of Health and Sanitation established a cholera control and command center to coordinate the response to what had turned into a national emergency. By the end of the crisis, there were 23,000 cases and 300 deaths.


August is the worst month for rain and the time when cholera can peak.

Speaking to Nina DeVries last August, the political head of the nation's beleaguered health ministry, Miatta Kargbo, said things have improved in terms of prevention and treatment of cholera. A water, sanitation and hygiene specialist for UNICEF said there is now a cholera task force comprised of international agencies and ministry of health staffers, who are now better trained to detect and treat cholera and that UNICEF has been working to improve water facilities across the country. Still, no one is overly optimistic.

Now, Sierra Leone's Ministry of Health is battling a new crisis: Ebola, an extremely dangerous virus that causes the horrific Ebola hemorrhagic fever in humans and other primates.


Yesterday, President Ernest Bai Koroma used a radio address to talk about what the nation’s health system and its partners have been doing to detect, treat and prevent Ebola. He also gave an update of Ebola cases as of July 1.

For his supporters, the president’s 1000 plus words were worth more than any picture the opposition could paint. To his critics, timing is everything. It doesn’t help they say that the president made no public statement for weeks and hasn’t visited Kailahun or Kenema since the Ebola outbreak.

Koroma’s speech came on the eve of a 2-day meeting of African health ministers aimed at devising a new response plan.

Critics blame President Koroma because they feel the central government’s response was inadequate. They are angry because, in their view, he appointed someone with little experience as minister of health and believe the perception that the government seated in the capital, Freetown, hasn’t stuck its neck out to help them.

Kailahun lies approximately 75 miles north-east of Kenema and about 300 miles (by road) east of Freetown, the capital of Sierra Leone.

According to the World Health Organization (WHO), although the government of Sierra Leone has been working intensively with WHO and other partners to ramp up a series of measures to control the outbreak, the Ebola virus disease outbreak in Sierra Leone, Guinea, and Liberia in 2014 has become a challenge.

The countries are working to bring supportive care to the ill, inform affected communities of recommended practices, trace contacts of infected patients, control infections in health care settings, and taking other measures to control the outbreak. Despite their progress in implementing preventive and control measures, health authorities still face challenges in curbing the spread of the outbreak, the report said. 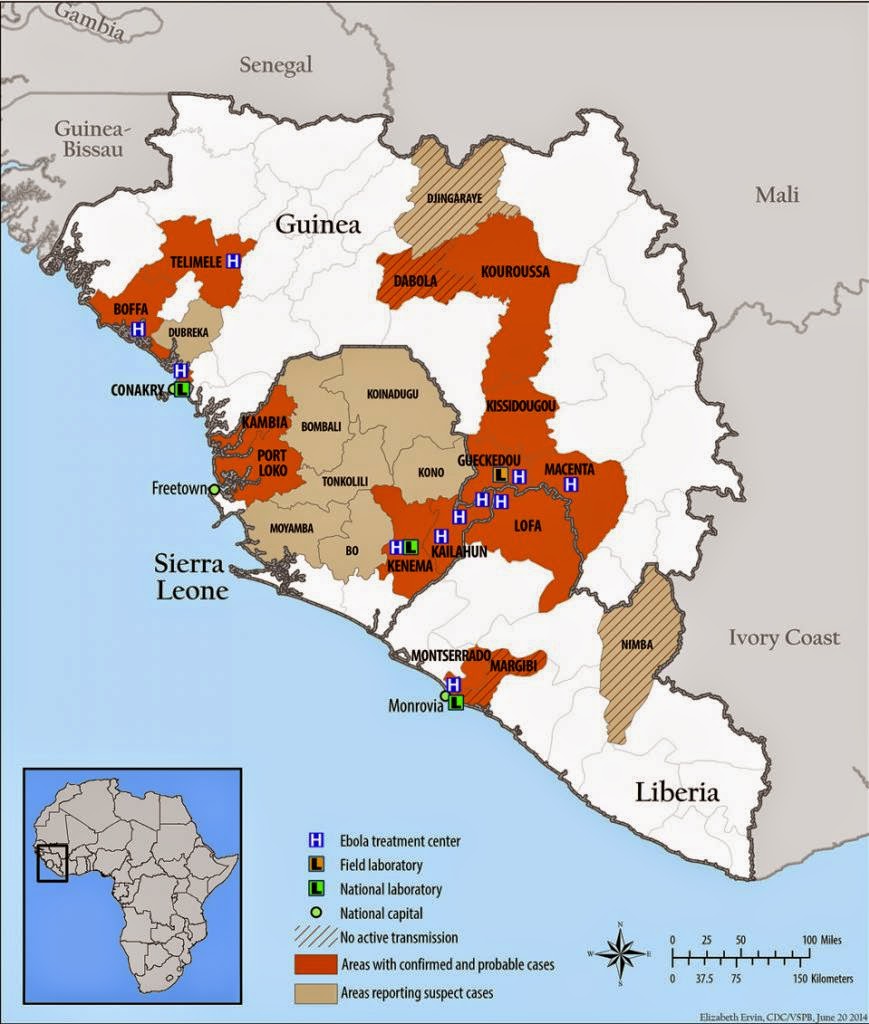 Lans Gberie, a coordinator and expert at UN Security Council Panel of Experts on Liberia, made a recent trip to the Mano River region and had this to say.

“I was in Liberia when the Ebola outbreak started in March. The president (Ellen Johnson Sirleaf) led the discussions about its presence, nature, precautions related to hygiene and burial methods on the radio. In Monrovia, every day you see Ministry of Health vehicles and posters relating to the Ebola outbreak, you hear radio discussions.  You know, in other words, that this is a national emergency. I saw none of this in Freetown and even Bo. Are we surprised that though the outbreak began at least two months in Liberia before Sierra Leone it has killed more people in Salone?”


In his radio broadcast Tuesday, President Koroma confirmed that as of July 1, 2014, 388 suspected Ebola cases have been tested, with 199 laboratory confirmed cases, 65 confirmed deaths, and 23 cases discharged. All of these cases occurred in Kailahun and Kenema districts, the president said. He also spoke of what the government of Sierra Leone has done since the crisis went viral.

"What the Government of Sierra Leone has done" - President Koroma's Address


"When Ebola hit our sister republic of Guinea we commenced and completed the training of 300 health workers on Ebola case management. And we have been training more on a weekly basis.


Working with our partners we have just recruited and trained an additional 150 volunteers in Kailahun for tracing people who have had unprotected contact with Ebola victims in Kailhun and we are soon commencing training of the second batch of 150 volunteers in Kenema.

In a separate statement yesterday, the WHO said that the occurrence of EVD (Ebola virus disease) led to denial and panic and has triggered myths and misconceptions surrounding treatment and control efforts in Kailahun and nearby districts that border Liberia and Guinea, wrote Lisa Schnirring, staff writer at the Center for Infectious Disease Research and Policy in the Academic Health Center of the University of Minnesota, Minneapolis.

Media reports about some of the public perceptions of the disease as well as suspicions about the care patients are receiving in treatment centers bolster the WHO's assessment. In some instances, members of the public have stoned medical staff working the treatment centers. Some patients have left treatment facilities against medical advice and are being harbored in private homes, amplifying the infection risk and making it nearly impossible for outbreak responders to trace contacts.

We salute the people of Bo, Koinadugu and Kambia for their vigilance and cooperation. We stand with the chiefs of Kailahun and Kenema in their continued effort to combat the further spread of the disease.
We commend the volunteer nurses and health workers in Kailahun who are making the personal and professional sacrifice to identify, diagnose and treat Ebola patients. I hereby instruct the immediate absorption of these brave volunteer nurses and health workers in Kailahun and Kenema into the civil service.


We know very well how this virus is transmitted, noted  Dr Keiji Fukuda in April. Speaking at the Guinea presser, Fukuda, UN assistant director-general for health security since 1 September 2010, said "We know the kinds of steps that can be taken to stop transmission. This is a virus which is transmitted either through body fluids or by close contact with an infected person. So if people take the right precautions, this is an infection for which the transmission can be stopped and the risk of getting infected is low with the right precautions. What this means is that outbreaks can be stopped through many of the public health measures being taken."

This is what happens when a crisis goes viral.