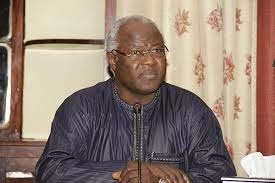 With Sierra Leone facing one of the deadliest Ebola outbreaks in recent history, President Ernest Koroma proclaimed a State of Emergency Wednesday, July 30, 2014 and directed state officials to take all necessary action to support the medical services.

"The disease is beyond the scope of any one country, or community to defeat. Its social, economic, psychological and security implications require scaling up measures at international, national, inter-agency and community levels," said President Koroma. "Extra-ordinary challenges require extra-ordinary measures. The Ebola Virus Disease (EVD) poses an extra-ordinary challenge to our nation. Consequently, and in line with the Constitution of Sierra Leone Act Number 6 of 1991, I hereby proclaim a State of Public Emergency to enable us take a more robust approach to deal with the Ebola outbreak."

In the State of Emergency declaration, President Koroma recalled Parliament to promote leadership at constituency level, ordered all epicenters of the disease to be quarantined, directed the police and military to give support to health officials and charities and restrict movements to and from epicenters. The President also directed state agencies to conduct surveillance and house to house searches to trace Ebola victims and suspects.

“We are increasing police presence around health facilities to uphold the law and prevent incidents of violence against health workers and vandalization of health facilities. The national effort of patriotic citizens from all regions, all political parties and districts must not be derailed by a misguided few. This country will resist them with the full force of the law, and by God’s grace, we shall prevail,” the president said.

The President’s Ebola State of Emergency follows a series of actions the administration has taken to ensure that Sierra Leone can end the Ebola scourge.

About six months ago, when Ebola hit communities in areas on the Guinea-Sierra Leone border, the Koroma administration, commenced and completed the training of 300 health workers on Ebola case management and have been training more on a weekly basis. The government of Sierra Leone also designed an Ebola Response Plan, set up an inter-ministerial committee to mobilize support across government agencies, and established a national task force comprising committees on case management, laboratory and surveillance, logistics, communications and social mobilization. The government also set up pre-referral centers in Koindu and Daru, treatment centers in Kailahun and Kenema, and observation units in government hospitals and health facilities all over the country. They engaged the Motor Drivers Union, Bike Riders Association, Market Associations, civil society organizations, musicians, and traditional healers, as they worked with their international partners for support, assembling an international team of professionals to aid national actions against the disease.

Click here for full text of the July 30 emergency proclamation