Sewa News Op-Ed | 'A protest full of peace: How I see what I saw at Lafayette' 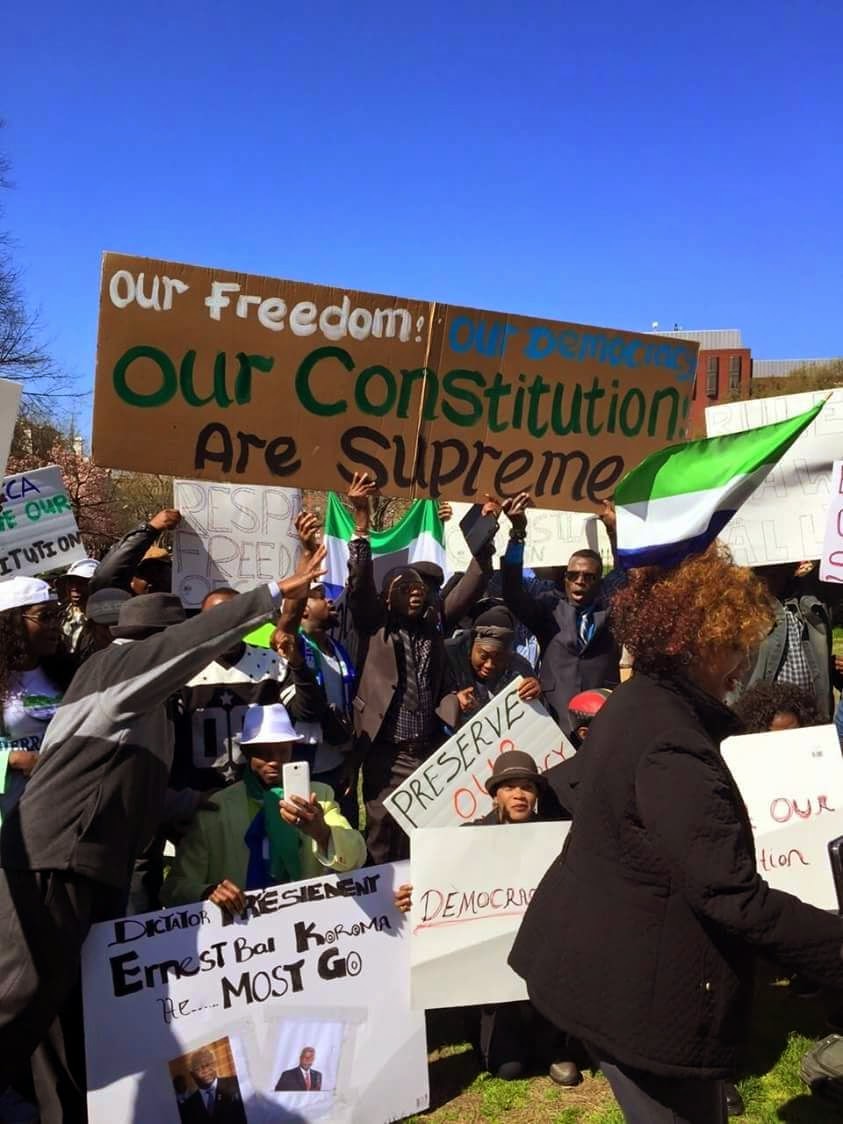 Sierra Leoneans came to Lafayette from all corners of America. It was a moment that ignited the grandeur, splendor, beauty, and spaciousness of Sierra Leonean hospitality.

It was a beautiful day in Richmond, the District of Columbia, and Maryland. The Sun dished out its bounty of soft, caressing rays injecting warmth into winter-beaten bodies.

I woke up at 5:00AM to get ready for the trip to Washington D.C.’s Lafayette Park.

Lafayette was the site of a protest that marked another significant moment in the tattered recent history of Sierra Leone.

A moment that brought together old, middle-aged, young, men and women of all ethnicities, religions, political affiliations, and from all regions of Sierra Leone to exercise, in a remarkably peaceful manner, their civic responsibility. It was beautiful to behold a large but disciplined crowd of Sierra Leoneans stand together to protect and preserve the sanctity of their national constitution; to protect the dignity of their Nation, and to say NO to dictatorship. Sierra Leonean patriotism was palpable in the air of the American park. Lafayette wore the colors of Sierra Leone.

When I stepped into Lafayette, I saw a number of my former students wrapped in Green, White, and Blue. The placards read like a love song to the Constitution. I was temporarily transported to my student days at Fourah Bay College (FBC) when that institution served as the conscience of the nation.

I had my own share of demonstrations at FBC. I never thought I would again have to participate in a demonstration against the same system in a foreign land.

Jimmy Kandeh, who, in his student days at FBC was synonymous with “demonstration,” was also there. What a déjà vu for us!!!

The organizers did a marvelous job ensuring that the event was purely national, by not allowing anyone to hawk their political wares at Lafayette. There were no Party colors, only neutral colors or the colors of the national flag.

Speeches were all about the constitution, democracy, corruption, or the rule of law. Messages sent in some of the national languages were directed at the unconstitutional action of the President, Ernest Bai Koroma. There were some barbs directed at Victor Foh’s “aratarity”— his irresistible urge to pilfer like a rat.

The turn-out was excellent.

Sierra Leoneans came to Lafayette from all corners of America. Many spent a lot of money to participate in the memorable Lafayette ritual. A Lunsar brother of mine, Hassan Baraka, made many placards and Sierra Leonean flags that he distributed among other Sierra Leoneans in the park. Mine was one of them. Such acts of good will and selflessness were not uncommon at Lafayette on Saturday. Some people brought food, water, snacks, etc. to share with others. It was a moment that ignited the grandeur, splendor, beauty, and spaciousness of Sierra Leonean hospitality.

What I see in all this is a Sierra Leone that can regain its glory if it musters the courage to construct and nurture a national identity from the different “identities” without altering anyone of them. All it takes is good governance from good leadership. What I witnessed at Lafayette was real; it could not have been faked. A national identity superseded the personal; individual interests succumbed to the national interest. Big personal egos bowed to a bigger national ego. There is hope yet for our country.

The moment, for me, was even more poignant because there was another group of Sierra Leoneans on another part of the Grounds to provide a counter protest. With their protest, the message to President Ernest Bai Koroma became even more potent. Clad in their party color, Red, the APC supporters provided a clear contrast between Country interest and Party interest. With a huge banner filled with the image of Ernest Bai Koroma, the APC crowd performed the ritual of Hero Worship at Lafayette.  Admittedly, it was a very small crowd of APC counter demonstrators but their presence was very important for several reasons:

Firstly, it showed the beauty of democracy which derives from respecting the constitution. That two different groups from the same country can share the same grounds in a peaceful manner to register their different concerns, is testimony to the significance of the protest to protect the constitution.
Secondly, and more importantly, it was clear that APC stayed home in spite of the campaign to counter-protest. There are thousands and thousands of APC supporters in the U.S. In the DMV area where the protest took place, there are thousands of APC supporters.

Yet, only less than two dozen showed up. How louder can the statement be made that President Ernest Bai Koroma has seriously wronged the people of Sierra Leone? How much more picturesque can emptiness be painted on the APC corner at Lafayette? I doff my hat to the APC supporters of America for making the right decision to stay far away from the charade that was the counter protest.

Thirdly, and most importantly, staunch and credible supporters of the APC joined the effort to protect the sanctity of our constitution. Some, like Mohamed Bangura, even sent a message in Themneh to President Ernest Koroma.

In essence, both protests, in different ways, sent the same message: President Koroma, the people of Sierra Leone disagree with you; they want you to leave the constitution alone. The APC crowd sent theirs by showing that APC in America is unwilling to support the President’s unconstitutional action.


Sheikh Kamarah is a professor of Languges and Literature in the School of Liberal Arts and Education at Virginia State University.