Last November, the city of New Haven kicked off a community-wide effort to raise $100,000 to help Sierra Leone's Ebola fight.  In a downtown Washington D.C. hotel Tuesday, New Haven city leaders met President Koroma to give him the good news.

Freetown has been one of New Haven’s sister cities since 1997.

"New Haven delegation just told President Koroma that their citizenry of 130,000 people raised $140,000 in cash to purchase ambulances and other goods to help the fight against Ebola," Sylvia Blyden wrote on WhatsApp's Media Junction.

In a gathering held at President Koroma's Washington D.C. hotel Tuesday, ahead of this week's World Bank-International Monetary Fund events focused on the global economy, international development and the world's financial markets, the president welcomed representatives of New Haven’s “Citizen’s to Drive Out Ebola campaign.”

According to a State House press release, the delegation from New Haven was led by the chairperson of the New Haven and Freetown Sister Cities Althea Norcott.

The donation of four cargo vans, medical supplies and a few school supplies will arrive in Freetown on April 21st and will be presented to President Koroma by Ambassador Bockarie Stevens (seated far left) and Mr. Mohamed Barrie, who were also at the gathering.

"I hope you will be able to attend this presentation," the New Haven's Mayor Toni Harp wrote in a letter addressed to President Koroma. Mayor Harp noted that New Haven is a small city of 130,000 people, "but it is a city with a big heart and I hope this gift will help you as you strengthen your infrastructure as the Ebola crisis ends."

President Koroma told the New Haven delegation that all donations will be used prudently.

"I want to assure you and the people of America that the gift you have provided will get to the targeted group, and as a government we believe that even when we are fighting Ebola we must guarantee transparency and accountability," he said.

President Koroma also took the opportunity to address the recent audit report, which found that more than half of US$18 million of treasury and public donation funds supposedly spent on fighting Ebola in Sierra Leone, lack complete paperwork and almost a third is officially “unaccounted for.

In September 2014, the Committee sent a container of medical supplies to Sierra Leone.

The original Amistad Committee was formed in 1839 to raise funds for the legal defense and return voyage of the subsequently liberated Africans who were involved in the Amistad Incident of 1839.

Twin towns or sister cities are a form of legal and social agreement between towns, cities, counties, and even countries to promote cultural and commercial ties, foster friendship and understanding between different cultures and to encourage trade and tourism.

New Haven is the home of Yale University. The university is an integral part of the city's economy, being New Haven's biggest employer. Health care also helps to form an economic base for the city.

Last October, test results for a Yale graduate student suspected of having Ebola came back negative, Yale-New Haven Hospital announced. The patient was one of two graduate students who returned from researching the Ebola outbreak in Liberia. 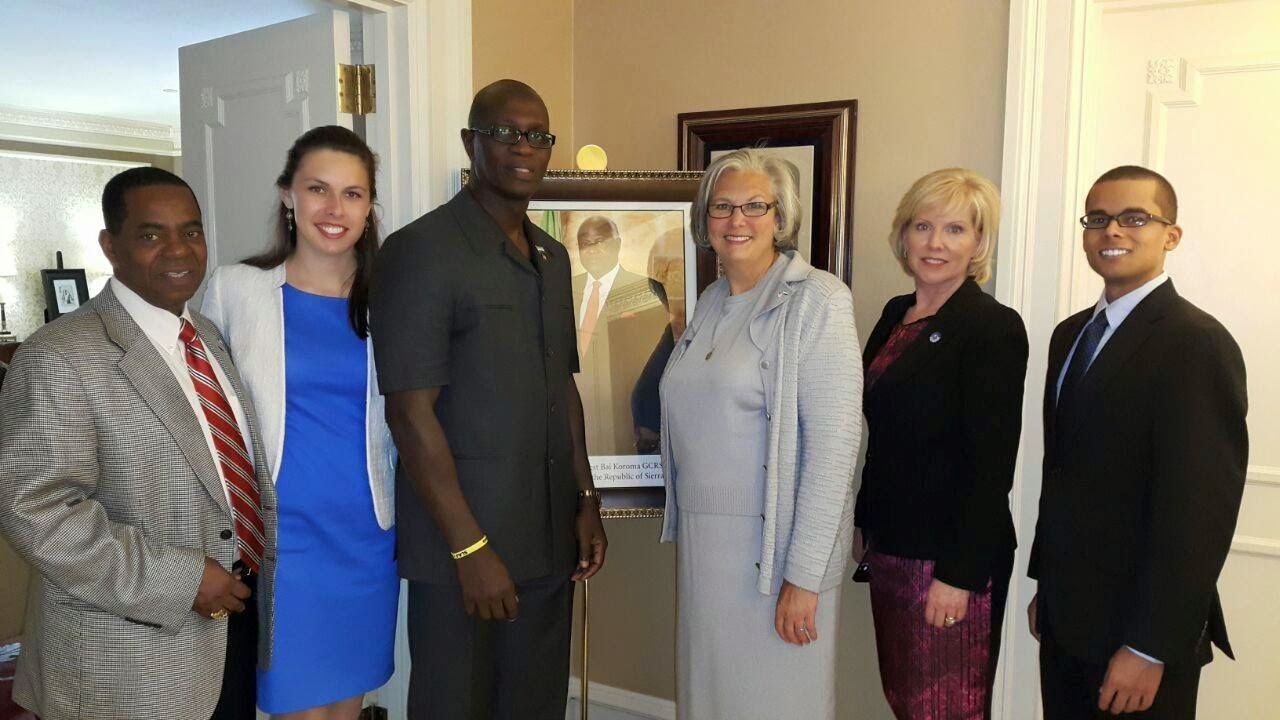 Sierra Leone is now the worst-infected of all the West African nations hit by the Ebola epidemic, with 3,857 of the 10,661 deaths across west Africa so far.

Of the 8,563 laboratory confirmed cases, Freetown has seen some of the highest numbers, One of the hardest hit regions, Sierra Leone’s capital city is ramping up efforts to eradicate the deadly disease using lockdowns, restrictions on burials and a warning to survivors about the potential dangers of unprotected sex.

Alfred Paolo Conteh (center), the chief executive officer of Sierra Leone's National Ebola Response Center, expressed his heartfelt appreciation. He said that without the support of good friends like the people of New Haven, the drop in new infections Sierra Leone is now recording would have been difficult.