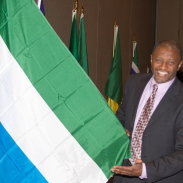 Amadu Massally was born in Sierra Leone during an era when the wind of change was blowing through the African continent and the growth of national consciousness was a political fact. An American-educated accountant, Amadu worked in the United States for more than two decades. In 2004, when the U.S. government set up its Millennium Challenge Corporation,  Amadu was one of the first Sierra Leoneans abroad to see opportunities for his low-income home land.

The Millennium Challenge Corporation (MCC) is an independent U.S. foreign aid agency that is helping lead the fight against global poverty. The MCC is changing the conversation on how best to deliver U.S. foreign assistance by focusing on good policies, country ownership, and results.

To be considered for funding, a country has to pass the ‘Control of Corruption’ indicator and either the ‘Political Rights’ or ‘Civil Liberties’ indicators. Sierra Leone successfully passed all three indicators, a State House press release said. To be eligible for a compact a country must pass half of the twenty indicators. This year, for the first time, Sierra Leone achieved this landmark by passing an impressive twelve indicators, two more than the required number.

Below are excerpts from an interview with Amadu sharing his professional experience as program manager of the team of people working on the MCC compact development process,as well as his personal outlook on life as a Sierra Leonean returning home from the diaspora.

Amadu Massally: I really did not plan to go home to stay when I left in 2009 after twenty-six and a half years in the United States.

I was coming to work on Domestic and Expatriate Nationals Investment-Sierra Leone (DENI-SL)—which was an initiative to encourage Sierra Leoneans in the diaspora, and at home, to pool our financial resources to buy one or more of the [agencies] that the government of Sierra Leone was privatizing.  We wrote a letter to then minister of presidential and public affairs, Alhaji Alpha Kanu, to ask that Sierra Leoneans be given a chance to participate in the process so our national assets would not be sold off to foreign interests who will not reinvest large portions of profits made, if any at all, back in our economy.

I got to Sierra Leone anticipating a three-month stint and stayed! To the dismay of my family.

Having been an advocate of the people and a development activist for some years, it was easy for me to dive in to implement some of what we proffered over the years via discussions in online and offline fora; advocacy we started as members of the Sierra Leone Network, an organization I joined as secretary-general and later presided over.  Core members included people like Amara Kuyateh (an accountant), Isata Kabia (now a Member of Parliament), Cecil John (an architect), Mustapha Sesay, Jesmed Suma, Oluniyi Robbin-Coker (currently Sierra Leone's Minister of Energy), and Mohamed L. Bah, proprietor of MEDSATU Forex, among others.

Amadu Massally: The transition, even though quite challenging, was enjoyable.  One has learnt a lot about us as Sierra Leoneans as compared to when I left the country for overseas studies at a younger age. There were many things one did not quite understand like I do today.  I can see that as a people, while we have a lot to be thankful for, we also have a lot we are directly responsible for.  And what do I mean by that?  Well let’s just say the call for attitudinal and behavioral change was not a misnomer and it is as real as the fact that when night  falls the place gets dark.

In addition to that you have personal issues.  I am used to taking showers at any time I want, with the water running under the most fitting temperature.  Unfortunately in Sierra Leone that has not been my experience.  You also have to deal with mosquitoes and malaria.  And  it's not fun when you are knocked down with it.

The roads, save the roads and infrastructure development which is on currently, are bumpy [and] streets can be challenging for drivers, passengers, and  pedestrians.

Sierra Leoneans are poor and proud; and they will quickly turn their backs on you even if it is detrimental to them.  So you have to maintain a healthy balance of dealing with the issues and not necessarily overcoming them, particularly as it deals with the complexities of people dynamics.

Sewa News: What are some of the gains in returning?

Amadu Massally: Home is home. And that should sum it up!

On a more detailed note it has pleased me not just to return, but that one could come back and contribute to the development efforts of our country.  Let us look at what one is currently doing.

The Millennium Challenge Corporation (MCC), as you have known me to be an advocate for, affords tremendous opportunity to change our country. Sierra Leone, in its current state needs a “second wind” of growth to bolster her development agenda and the MCC can be that catalyst.  As program manager of the core team of people working on the compact development process, we are ultimately responsible for the direction in which this “second wind” can be guided.  One is up to the challenge as this solution will help put into reality dreams you and I, or every Sierra Leonean for that matter, should aspire towards and espouse.  So, in essence, that is the greatest benefit of returning home.

There are other personal benefits of course: that one is not just a mere statistic like I was in the U.S.  The comfort and warmth one feels from being among your countrymen and women is itself a blessing.  It is worth my while both nationally and as an individual to be back home.  And I cannot overemphasize these.

1. Treat people with mutual respect. Be tolerant of their shortcomings without compromising your principles and/or good practices learned from being abroad
2. Be very careful of financial transactions. Encourage others to be fair and transparent in their financial dealings with you and/or others to foster a culture of honesty and integrity
3. Refrain from joining the “la-DI-da” lifestyle of others, who have returned and forgotten their responsibilities to the nation and subscribe to the unhealthy status quo
4. Make sure that you are either gainfully employed or have a potential thriving business idea to implement right away to avoid the sharks in society
5. Take your health seriously. Be careful of what or where you eat or drink; both at home and in public.

A happy 52nd Independence Anniversary to Sierra Leoneans the world over.