An artist’s impact may not always be measured by the amount of outrage his/her creation generates, but it is a good sign when it provokes. Emmerson Bockarie, Sierra Leone’s most important artist, will fit well in the category of national bard. By this I mean that his music—didactic, in a free flowing conversational style, calm and beautifully enunciated—embodies most completely the yearnings and neurosis of his fellow citizens. Bockarie’s most recent offering, released just about Christmas, is entitled “Kokobeh.”

The Krio word derives from the Twi (a Ghanaian language) for leprosy, an exquisitely appropriate image for the corruption and putrefaction that the artist so witheringly derides. Sierra Leoneans have come to expect such commentary from their most popular poet and singer, and the squalid wells of misgovernment and graft in the country continue to fire his imagination.

When he released “Borbor Belleh” in 2005, Emmerson accompanied the song with a video showing a fleshy, heavily loaded man carrying a suitcase full of cash, his blokish exterior exuding prosperity as a physical secretion, and the starving little people around him only emphasizing his isolated well-being. 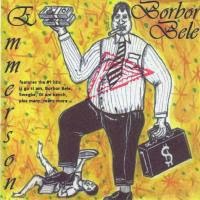 “Borbor Belleh” destroyed the argument, if there was any, for the re-election of then ruling Sierra Leone Peoples Party (SLPP).  Prince George’s (aka Innocent) hit song "Injectment Notice" seemed to have merely delivered the coup de grâce with its cruder message and artless delivery, complete with a billboard image of a frustrated landlord giving the boots to his errant tenant, definite and resonant. The party and its candidate Solomon Berewa—the easily caricatured and humorless former vice president—lost those elections.

Kabs Kanu, the oppositionist journalist, was among the most vehement in hailing both the form and the matter of "Borbor Belleh."

Not so with “Kokobeh” which, like "Borbor Belleh" shows Emmerson at his most mordant and lyrical. Since the 2007 elections, and still now, holding the wonderfully inchoate position of Ambassador Plenipotentiary, Kabs Kanu last week reacted to "Kokobeh" with fury, both on grounds of its message and its aesthetic quality.

The quality of music, he wrote, is “so poor and tasteless that you [sic] do not want your country to be associated with it.” There is something, he wrote, called “creativity and the mode called euphony.”

Whatever happened to these?

Ah, he sighed, in his usual clerical disgust, “the sounds and the lyrics of the song are not only tasteless; they are infuriating as the musician labors to create meaning and impact.”

So I decided to re-listen to "Kokobeh" as a New Year gift to myself, and what a gift it was! It went with the very matching video. I also made sure a dictionary lay open before me to the word ‘euphony.’The wonderfully serene and beautiful voice, assured, without anxiety, began:

Emmerson had in 2010 issued “Yesterday Betteh Pass Tiday”—milder in tone, the artist’s subtler message a sign that he was merely giving notice. His blows have now landed. So that when I see my old old friend Shekito deploying Isaac Watts’ infant ditty to accuse our cosmopolitan bard of “tribalism” I know for sure that he gets the message.

An academic and writer, Dr. Lansana Gberie has written extensively on conflict, conflict management, human rights and peacebuilding in Africa. He is also author of A Dirty War in West Africa: The RUF and the Destruction of Sierra Leone (London: Hurst 2005).

Sewa News said…
"Kokobeh, in Temne, besides meaning "everything" is metaphorically used to mean an undiscriminating "glutton" when used to refer to a person. T he famous Temne phrase in which kokobeh is best known is, "Kokobeh I nohpeh," meaning, "Everything and anything I will push through my stomach." In Emerson's "Kokobeh," this metaphor continues the imagery of a broken receptacle started in "Borbor Belleh." The insatiable greed of the politician who possesses an irresistible urge to pilfer is captured in Kokobeh. Also the idea that these politicians and well-placed gluttons keep pushing their loot through their stomachs, pockets and other receptacles even when they are full, causing a discombabulation, is captured in this word. Kokobeh is an apt metaphor to capture yet in a new imagery, the gluttony that is our national political shame" - SK
9:46 AM