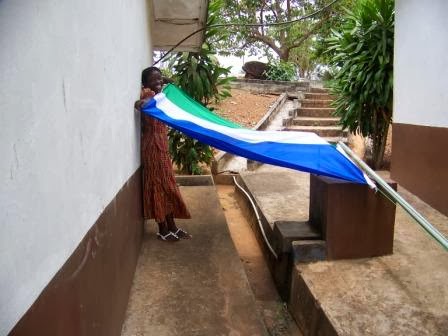 But let it also be known that goodwill is not only about wishing it; it is also about taking actions that show that we have goodwill. Let us therefore make resolutions to take specific actions that show our goodwill for our country.

A week and half ago, at the State Opening of Parliament, I stated my government’s resolutions for the coming year. I reiterated our commitment to continuing actions for more investment and job creation in this country, more infrastructural development, more money into the pockets of Sierra Leoneans by raising the minimum wage, more actions in the fight against corruption, actions to reform the public service and more actions with and for women and youths. I noted that we still face challenges, but that it is within our heritage to overcome these challenges and make this country great again.

As President I took an oath before God and citizens to move this country forward, and by the Grace of God, I shall remain true to this vow. But moving this country forward does not only depend on the actions the government takes; Ernest Bai Koroma is not everywhere, ministers of government are not everywhere, and mayors and chairpersons of councils are not everywhere at every moment. The structures that are in place to develop our country work better and productively when individuals use them well. The question every morning for every individual Sierra Leonean should be, what has my country gained from my actions; what specific actions am I taking to contribute to the growth of this nation; what have I done to bring honour, respect and laurels to my community and my nation?

Let the nurse sustain goodwill for this nation by the way she treats the pregnant woman and child under five; let the teacher manifest goodwill for Sierra Leone by the way he makes the student beam with understanding of what he teaches; let the service provider from civil servant to bank workers, restaurant workers and taxi drivers behalf respectfully to those they serve; manifest goodwill for this beloved land by not misusing the roads being constructed, by not throwing garbage into the streets, by not engaging in riotous behavior. These are simple things that are within the capacity of everybody to do; but when all these add up, when all these little demonstration of goodwill become entrenched in the normal cause of our lives, then this country shall have gone very far into being great again.

If you are not manifesting this goodwill, if your actions inhibit the expansion of goodwill for this nation; if your behavior hinders the development of youths, women and people from every part of this beloved land, then it is time for a new resolution. It is time for a new resolution for change in our relationship with each other, a resolution for a new era of commitment, patriotism and pride; a new era for emphasizing the fact that though we still face challenges this country has done better than most post conflict societies in ensuring peace, in sustaining democracy, in fighting corruption, in rebuilding its infrastructure, in attracting investment, in creating jobs, in increasing access to healthcare, in enrolling its children in schools, and in enhancing agricultural productivity.

I joined politics because I believe in this nation; I asked you to elect me your President because I trust there are enough good men and women all over this nation to turn around the tides of the nation, enough men and women of goodwill to make this nation great again; enough men and women of resolutions strong enough to push them to noble actions for this beloved land. Today I reiterate my call to all these men and women to show case that belief by standing up for law and order; today I summon all those who believe that transformation is possible to demonstrate that faith by their respect for public property; today I ask all Sierra Leoneans to take actions that will make this country proud, actions that honour our positive heritage; actions that secure our achievements; and that are aligned with our aspirations for a democratic and prosperous nation.

With the Agenda for Prosperity we have commenced the journey to a prosperous Sierra Leone. This is an agenda of goodwill for the nation; it is an agenda of positive resolutions across eight pillars, and it is an agenda that calls out to every one to come on board, to demonstrate goodwill to this nation by doing what is patriotic and productive in his or her efforts. Patriotism and productivity must be the new catchwords, demonstrate your patriotism by being productive, that is the only way we can together achieve the goals we have set out for this country.

Season’s greetings; and may 2014 be the year of goodwill for this country. God bless you and God bless the Republic of Sierra Leone.