There should be a Memorial… 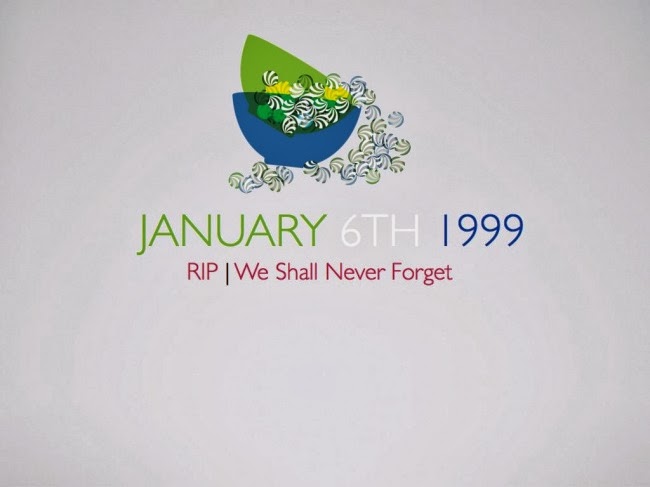 There should be a Memorial…A poem by Dennis Bright

There should be a memorial…
To all the fambul dem that we crushed and rushed
Through the narrow gates of painful, shameful Death
To all the boys whose temple we violated with brown-brown
To keep them on the drill of the machine gun or the butcher’s knife

We should have a memorial…
At the place where limbs were harvested, virginity ripped
Bets won by opening up the woman’s womb, boy or girl?

Hell must be remembered
Like when the stampeding village folk left behind
A lonely, hungry baby
Scrounging for life
And he settles for a bite of a live grenade

Let us make a memorial
To that time when our beauty and innocence
Were swept away by the bloody floods of Shame
To that time when we knew that The Thing lived in us
And we were not proud
Of that time,
Time when no answers were found for the spirit
That wanted to know
Why we did
What we did.

So we must build a memorial
Together,
With the same hands that battered ourselves
With a single mind pounded in the mortar of our inglorious past
We will build a monument
Neither to hate nor to shame
But as warning post of
The road not to be taken again.


Dennis Bright used to be minister of youth and sports in the Ahmad Tejan-Kabbah administration from 2002 to 2007. He is currently regional director for   Right to Play's West and Francophone Africa region.

"We work mainly in the field of child and youth development and adopt a novel approach to behavior change in education, health and peace-building based on the extraordinary power of sport and play," Bright says. I am currently living in Ghana although I supervise programs in Mali, Benin, Rwanda, Liberia and of course Ghana.

When I am not working, I am interested in writing short stories and poems. I have for a long time now been wrestling with an idea; that one missing link in our history is in fact a memorial to the war that ripped us apart in Sierra Leone. A memorial has many roles to play particularly in preserving the memory of the historic event but more importantly to embody the resolve of a nation NOT to go down that road again.

In Rwanda for example not only is there a war memorial in every town, visited by all including children, but the entire month of April is dedicated to national reflections, discussions, soul searching around national issues and unification initiatives looking into the future. I believe Sierra Leone fully qualifies for this kind of experience. The current political climate and all its social repercussions make it imperative for some kind of stop-and think measures to be taken at a national level, and in my opinion, a memorial to the war is a good place to start.

I would very much love to throw this idea up for debate so that many more patriotic minds can bring in wisdom to validate or invalidate the concept.