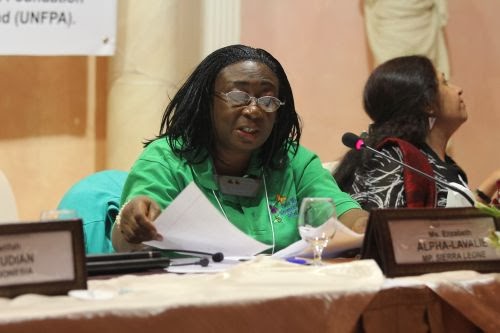 Elizabeth Tygsona Alpha-Lavalie,  a professional banker turned politician, died in Freetown this morning. She had been in a coma for a month, according to unconfirmed sources. She was 66. A sitting Member of Parliament (MP) for sixteen years, she was recognized nationally and internationally as a formidable peace advocate and champion for good governance.

Hon. Elizabeth Alpha-Lavalie was a long-serving Sierra Leone People's Party (SLPP) representative for Bo District and made history in 2001 as the first female to be elected to the post of Deputy Speaker.

Elizabeth or Lizzy as she was fondly known was born on January 5th, 1947. Before entering politics in 1991, she worked for the Standard Chartered Bank (SL) from 1968 to 1971 and left to earn a banking degree in Britain. She returned home to Sierra Leone in 1975 and was re-employed by the Standard Chartered Bank (SL) having attained a banking diploma. She was an associate of the Chartered Institute of Bankers and part of the first crop of  professional bankers in Sierra Leone. In 1987, she left the British owned multinational banking and financial services company to take a management position with the Sierra Leone National Development Bank.

During her banking career, she delivered lectures to students at the Institute of Public Administration and Management in Freetown. She was also a member of the Sierra Leone Insurance Association.

In 1996, she was elected to represent the BO South Constituency and served as MP from 1996 until 2012. During this period, she was chairperson for the Health and Social Services Committee (1996-1997) and the Finance Committee (1996-2002) before being elected Deputy Speaker of the House of Parliament in 2001, a position she held until 2007. As deputy speaker, she was chairperson of the Public Accounts Committee (2001-2007), a member of the Economic Community Of West African States (ECOWAS) Parliament (2000-2005)-Second Rapporteur Foreign Affairs Defense and Security Committee. She later served as the chairperson of Human Rights Committee (2007-2012) and Eminent Member of the ECOWAS Council of the Wise.

As chairperson of the Finance Committee and as the Public Accounts Committee, she advocated for the establishment of the National Revenue Authority to consolidate revenue collection; strengthening of public accountability and enacting of the Anti Corruption Act; strengthening the award of contracts to reduce leakage and legislation for public procurement as well as oversight of state ministries, departments and agencies for good democratic and fiscal governance.

Mrs. Alpha-Lavalie was president of Women in Action, coordinator of the Women’s Movement for Peace Eastern Region, founding member of the Mano River Union Women’s Peace Network, and a former internal auditor and deputy secretary general of the Sierra Leone People's Party. She ran a formidable campaign for leadership of the SLPP in 1996 and was one of 19 contenders, including three women, in 2011.

She was Commander of the Order of the Republic of Sierra Leone, 2007.

After retiring from Parliament, Hon. Alpha-Lavalie founded the Civil Society Parliamentary Advocacy Network-Sierra Leone. She worked  to educate the public about the functions of parliament and how civil society could influence the ratification and domestication of international protocols, treaties and conventions which Sierra Leone had signed on to. She also acted as a consultant on pending legislation which needed the expertise and experience of her 16 years in parliament.

On September 3rd, 2013, she  launched a report which provided analysis of women’s access to and control over land in Sierra Leone. The study targeted women in Bombali, Tonkolili, Kambia, Moyamba, Bo districts and the Western Area and had basic data on women’s status regarding rights, access, control over and ownership of land in ActionAid Sierra Leone’s operational districts. Hon. Lavalie noted that even with the enactment of the Devolution of Estate Act in 2007, women in the provinces still face enormous challenges to inherit land from their husbands.

Launching the report, Hon. Elizabeth Alpha Lavalie noted the national government and private companies are obtaining access to land to meet the growing demands of investors. Executive Director of ActionAid Sierra Leone, Mohamed Sillah said that according to the study some of the main reasons for women’s poor access were discriminatory customs and traditional practices, such as overwhelming authority of men over women in communities and household levels, women’s lack of knowledge on land rights and the Gender Acts, and lack of financial resources to acquire land under the tenure system. ActionAid’s project coordinator, Sydnella Rogers spoke of plans to implement a three-year women’s rights to land project with support from the European Commission, with the objective of empowerment, improved living standards and dignity for poor and excluded women.

Twice widowed, Hon. Elizabeth Alpha-Lavalie was the daughter of the late Joseph Emman Henry Tucker, (deputy speaker 1961-1967) and Vivat Edith Letitia Tucker, a midwife and master farmer. She is survived by her four children and several siblings including Dick Tucker; Magdalene, who resides in China, and Vivat Margai, spouse of Charles Margai,  the leader of the People's Movement for Democratic Change (PMDC) the third major political party in Sierra Leone, after the big two, the Sierra Leone People's Party (SLPP) and the All People's Congress (APC).